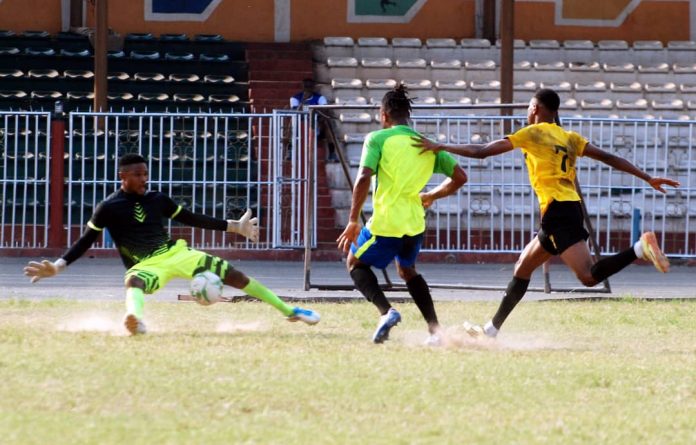 Seven-time Nigeria league champions, Rangers FC did everything right but found it hard to bury any of the numerous chances created as Umuahia based, Diamond Football Academy, did well to run away with a goalless draw in a pre-season friendly encounter played on Friday in Abakaliki.

Head coach, Salisu Yusuf gave the nod for the pair of Abia Israel and Ajayi Femi to lead the two-man attack but tried as they did with supplies from the trio of Chiamaka Madu, Esor Achibong and Ugwuoke Ugochukwu, the boys of coach Chijioke Osuagwu held tight at the back.

Abia had the best opportunity to score on 23 minutes after he was put through on goal with a defense splitting pass from Ugochukwu but the goalkeeper for the opponents, Ebuka, made himself big enough to stop his effort.

The second stanza saw a much hungrier approach from the premiership side as the chances created came quick and fast but Ebuka stood between Rangers and goals as he blocked, parried, clutched and did all that he could to ensure that no goal was celebrated with the cross-bar and upright coming to his assistance on some occasions.

At the hour mark, an Osas Okoro curly shot beat all but hit the crossbar to the relief of the Umuahia side while ten minutes later, a well drilled shot from Daniel Vendaga was scrambled out by the alert backline for the coach Osuagwu side.

Nnamdi Egbujuo and Ifegwu Ojukwu both watched their goal-bound efforts blocked out by the agile goalkeeper, Ebuka on 80 and 89 minutes.

Osuagwu was full of praise for his wards for playing to instructions against a formidable side, Rangers International.

Yusuf on his part, described the encounter as a good one as he continues to mould the ‘Flying Antelopes’ into a side to challenge for all trophies in the coming season.