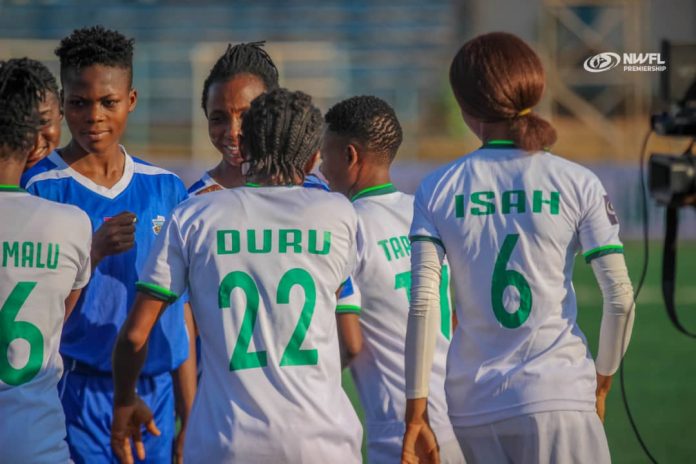 After a thrilling round of fixtures in the last outing of the NWFL Premiership, week 7 throws up some more scintillating ties. Edo Queens will seek a quick return to winning ways, when they face Confluence Queens at the Samuel Ogbemudia Stadium, Benin while Nasarawa Amazons will take on struggling Ibom Angels at the Godswill Akpabio Stadium, Uyo I’m the peak of the fixtures slated for today.

Osun Babes will be hoping to dust themselves off against Sunshine Queens at the Osogbo City Stadium on Wednesday after losing 2-1 to Rivers Angels in Port Harcourt.

Here is the Week 7 Preview of the NWFL Premiership as brought to you by www.dasportstainment247.com.

This fixture in 2019 ended in a draw, which got the late George Emenetie sacked by Delta Queens Chairman, Tony Okowa.

This time around, Delta Queens look more confident, having won all their home games this season and even picked a point away from home last week.

Osahon Emmanuel will still be without his influential captain, Gift Monday and Habibat Akinwande, who just won the Turkish Women’s Cup with the Super Falcons and may need break after the exhaustion of the tourney in Turkey. Delta Queens are 6th on the log with 10 points, while FC Robo Queens are 3rd on the log, with 12 points.

Edo Queens have provided some of the best entertaining games so far this season and yet again, they will be facing Confluence Queens at the Samuel Ogbemudia Stadium, Benin, in a duel, they are so confident of winning after the last gasp slip in Yenagoa versus Bayelsa Queens last week.

The team, under Rollandson Odeh has shown remarkable resilience in most of their games and by contrast, Confluence Queens drew their last game at home and the team seem to be more troubled with the administrative issues ongoing at the club.

Bayelsa Queens will travel down to Umuahia to face Abia Angels at home on Wednesday. The ‘Angels from the East’ have picked 6 points so far and will be more than determined to play well against league leaders, Bayelsa Queens, who won Edo Queens last week in a difficult contest.

Abia Angels lost at home the last time against Sunshine Queens and their fans will surely be expecting an improved result,when the ‘Restoration Ladies’ arrive more so because they have lost their last three games in the league.

The ‘Orange Ladies’ have struggled so far in the league and have lost their last three game, which includes a home loss to Rivers Angels.

This game is an important one for them, but Christopher Danjuma and his girls are a tough nut to crack, no wonder Edo Queens sweated before getting a lone goal victory in their last away loss.

Moruf Adeyemo can’t afford to lose this game, same with Christopher Danjuma. It’s going to be a cracker of a game.

The south-west derby between Osun Babes and Sunshine Queens usually ends with a lone goal victory for either sides. The last time this two met in Osogbo, it ended in a stalemate.

The Omoluabi Queens have won all their home games and will want to add more points to their 9 points this season. Sunshine Queens will be without their manager, Wemimo Matthew, who just returned from Turkey with the Super Falcons where Nigeria won the Turkish Women’s Cup for the first time for Africa. We await a great encounter.

Nobody gave Pelican Stars the chance, when they traveled down to Lagos to record their first win of the season against Dreamstar Ladies, they face a tougher challenge against Rivers Angels, who haven’t lost a game this season.

Pelican Stars moved away from the relegation zone by virtue of the away win in Lagos and wouldn’t want to go back to the drop.

Dreamstar Ladies are bottom on the log with just 3 points and would travel to Warri to face Royal Queens in a game the ‘Canadian Geese’ will be aiming to garner after their emphatic loss to FC Robo Queens last week.

Dreamstart Ladies will surely give a big fight and will be hopeful to get a favourable result.