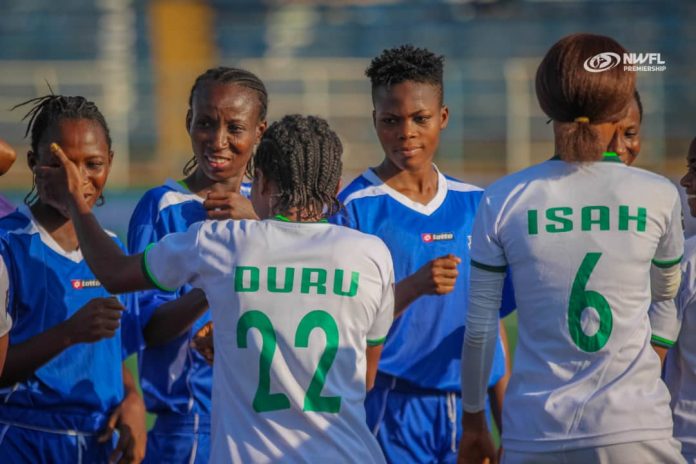 Nineteen (19) goals were scored from seven games played last wednesday in the 2021 NWFL Premiership opener, Nine less than we had in the 2019 season.

We had some shocking results in Matchday One, FC Robo traveled down Lafia to pick maximum points against Nasarawa Amazons while Osun Babes defeated Ibom Angels in Uyo.

There would be more exciting matches across seven centres on Wednesday, with FC Robo taking on Osun Babes ; Pelican Stars up with neighbours Ibom Angels; Abia Angels travel down to Warri to face Royal Queens; DreamStar Ladies will be at home to Edo Queens; Rivers Angels Vs Delta Queens, and Sunshine Stars Vs Confluence Queens.

The heavyweight clash of this midweek will be the game between Nasarawa Amazons and Bayelsa Queens at the Lafia City Stadium. On paper, this should be an explosive game, but as we learned in this industry, some of these big games do not live up to the hype. However from the matchday One result recorded by Nasarawa Amazons, we should expect a mouth-watering clash.

As usual www.thenwfl.com with support from www.dasportstainment247.com will be previewing all the seven games.

This fixture is always regarded as a tough one, not even after both teams are just coming back from an impressive away victory in Lafia and Uyo respectively.

The ‘Lagos Landladies’ defeated Osun Babes home and away in 2019 and will be looking at taking the maximum point on Wednesday.

Though it is always a difficult tie with a very close scoreline, I don’t expect it to be different this season.

Both teams lost in their week one fixture and will be hoping to get a favourble result in week two. Edat Egan and Moruf Adeyemo are two experienced managers in the Women’s League and will be taking this match more than serious.

Both sides will be under a lot of pressure, for Ibom Angels, they lost at home in their first game while Pelican Stars lost 2-0 to Abia Angels in Umuahia. Pelican Stars will have to do more if they are to win this game. It is a south-south Derby and much is expected from both sides.

The ‘Canadian Geese’ were hammered 4-1 by Edo Queens last week and they would want to immediately remedy that when they host Abia Angels, who won against Pelican Stars in the opening day fixture on Wednesday at the Warri Township Stadium.

Following the resignation of Abayomi Olorunda, who took the team from the Championship to the Premiership, the team started a new chapter under Paul Mene last week in Benin and Abia Angels could be another big test for them.

The more experienced Bukola Oni may start in goal for Royal Queens after missing out on Benin, while Alake Rahinat, Vera Samuel, Chioma Oliseh and others need to play well to achieve a great result against a very good Abia Angels side.

The Galaticas will welcome the ‘Obaseki Ladies’ to the Agege Township Stadium, Lagos for Wednesday’s NWFL Premiership Matchday two encounter. The Lagos based side were taken apart by Delta Queens last Wednesday and they will want to quickly bounce back from the defeat with a very good showing against Edo Queens.

The visitors will be going into the game on a high, after defeating Royal Queens in their opening game of the season. In this same fixture one year ago, Edo Queens came out victorious in Lagos and will be looking at repeating the same feat. DreamStar Ladies have some exciting youngsters and will give their all infront of their fans to record their first victory of the season.

Mercurial midfielder Juliet Emereole have a lot to shoulder from the midfield and also as Captain, Anuoluwapo Salisu will be aiming at replicating what she did in Agbor last week, while big signing Hambefen Ayatsea should live up to expectations in the game.

Edo Queens seem to be more experienced in all ramifications, but time will tell if Tessy Biahwo, Taibat Odueke and others will have a great game in Lagos.

Rivers Angels will welcome the ‘Okowa Ladies’ to the Adokiye Anesiemaka stadium, Port Hacourt with the sole aim of handing out a defeat to their South-south neighbours Delta Queens. Delta Queens have improved markedly and that saw them tear DreamStar Ladies apart on matchday one.

Rivers Angels Manager, Edwin Okon understands that winning is important and will want to add to the one point gained at the Confluence Stadium, against Confluence Queens last week.

Both teams will be searching for their first win of the season. Sunshine Queens lost to Bayelsa Queens in Yenogoa, while Confluence Queens drew 1-1 at home against Rivers Angels.

This game should witness alot of goalscoring opportunities as both sides play free-flowing attacking football.

Whyte Ogbonda hs settled his differences with the Club’s management and ready to face ‘Betty Babes’ in Akure with his arsenal’s.

Joy Omewa will be hoping to score her first league goal, while Innocent Patricia, Suliat Abideen will be aiming for a win on Wednesday.

This is the biggest match of the week and much more looking like a dejavu for Nasarawa Amazons except they come out stronger this time around.

The last time these two teams met in Lafia, Bayelsa Queens came out on top 2-1 with Anjor Mary scoring a brace.

Both sides also met in the finals of the Flying Officers Pre-season Championship, where Bayelsa Queens won by a lone goal scored by Barakat Olaiya.

Christopher Danjuma understands that anything short of victory would be a disappointment to the fans, not after losing at home to FC Robo Queens in their first game of the season.