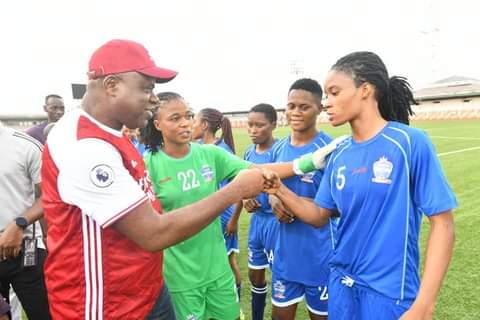 Bayelsa Queens began the Nigeria Women Football League Premiership with a 2-1 home victory over Sunshine Queens at the Samson Siasia Stadium, Yenagoa in the opening game of the season watched by State Governor, Douye Diri and other important dignitaries on Wednesday.

The game filled with many notable high points and mild drama lived up to the billing as the sizeable number of spectators that made it to the stadium’s stands due to the Covid-19 protocols enjoyed their team’s first home game of the season.

Technical Adviser of Bayelsa Queens ,Moses Aduku made few changes to the team that beat Nasarawa Amazons in the final of the recently held Flying Officers Cup in Abuja

Bayelsa Queens captain, Joy Jerry got the Restoration Ladies curtain raiser in the 27th minute through Igwe Uzoamaka’s pinpoint cross which enabled her to meander her way to past the visitors goalkeeper who was outstanding in the game and had twice denied Anjor Mary two scoring chances.

The Akure Ladies almost restored parity three minutes after the opener but Bayelsa Queens goalie Okeke Oyinyechukwu made the difference .

Precious Vincent in the 34th minute doubled the lead for the Yenagoa side but seven minutes later Fakunle Seun reduced the deficit for the visitors through goalkeeper Okeke Oyinyechukwu’s blunder.

Bayelsa Queens sensation Anjor Mary could have made it three but the woodwork prevented Sunshine Queens from conceding the third goal from her long range shot in the 60th minute. The host missed several scoring opportunities in the second half that would have made the home game an emphatic win.

The victory leaves Bayelsa Queens with three points after match day one of the 2020-21 Nigeria Women Football League Premiership.