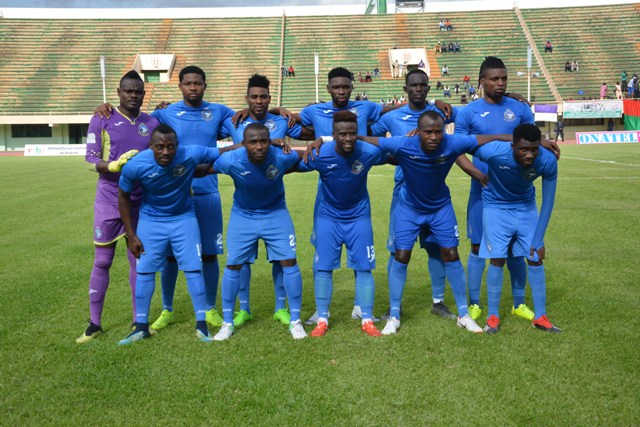 Enugu Rangers moved out of the relegation zone for the first time this season when they pipped Jigawa Golden Stars 1-0 in a rescheduled game played on Wednesday in Enugu.

Dauda Madaki scored what turned out to be the match-winner in the 70th minute from a good pass from Ibrahim Olawoyin. The three points ensured that the Flying Antelopes move out of the drop zone to the 16th position with 20 points from 15 games.

They could still ascend even more with four more outstanding games to be played by them.

Goals from Stanley Dimgba, Austin Oladapo and Victor Mbaoma gave the People’s Elephant the vital three points they seek. They are now 11th on the league table with 24 points from 15 matches. They could still move up the league ladder the more with four games still at hand.

Dakkada and Akwa United settled for a 2-2 draw in an NPFL Matchday 30 tie brought forward by the organizers of the league.

Lobi Stars returned back to the top of the league table after displacing Plateau United who were hitherto there week before.

MFM also returned to winning ways after they defeated Kano Pillars 3-1 in a game they had to come back from behind among other games played.

Here is how the NPFL MatchDay 19 games panned out over 10 centres on Saturday and Sunday.

The weekend action started with the duel at the Godswill Akpabio Stadium, Uyo between Dakkada FC and Plateau United and the game ended in a goalless draw with the Peace Boys goalkeeper, Chinedu Anozie saving his team from a late defeat after he stopped  Eso Archibong’s penalty kick in the 84th minute.

Dakkada ended the first stanza in the fifth spot with 29 points from 19 games while Plateau United draw meant they relinquished their first position. They fell to the second spot with 33 points from as many games.

At the Pantami Stadium, Gombe, Adamawa United upset Heartland 1-0 through the strike of Adam Yakubu in the 64th minute to improve their chances of surviving the relegation zone. They are still 19th on the league table with 17 points from 19 games. Heartland on their part have stumbled in their quest to move into the top five due to the loss. The Naze Millionaires remained in the ninth spot with 25 points from 19 games.

Rangers International continued their resurgence in Uyo as they held Akwa United to a goalless draw at the Godswill Akpabio Stadium, Uyo. They have gone on six matches unbeaten and are steadily moving out of the relegation zone. The Promise Keepers on their part have only won one game in their last six fixtures but they drew three from those games.

Akwa United finished the first round in the six-position with 28 points from 19 matches while Rangers are in the 18th spot with 17 points but they have five matches at hand.

At the Enyimba International Stadium, Aba the latest Abia derby ended 2-1 in favour of Enyimba. It was the People’s Elephant that shot into the lead in the 45th minute through impressive Austin Oladapo who scored via a well-executed freekick.

Okon Otop Eta netted his second goal for new Abia Warriors to level the scores in the 58th minute but Enyimba had the last laugh with the matchwinner through Stanley Dimgba in the 76th minute for the Aba side second successive victory after the three points they claimed in Lagos against MFM on Wednesday.

Fatai Osho’s men have steered clear of the relegation zone despite still having five games yet to play. They have 21 points from 14 games while Abia Warriors ended their first round campaign in the 11th position with 24 points from 19 games.

At the Muhammadu Dikko Stadium, Katsina, the home team, Katsina United held on for a nervy 2-1 home win over Warri Wolves. It was as if the Changi Boys were charging for a routine home win when Joseph Atule and Gambo Mohammed put them in the ascendancy in the 45th and 55th minutes but Charles Atshimene’s 71st minute strike for the Seasiders meant Katsina United must Ward off a late fightback to secure their seventh win of the season.

The Changi Boys finished the first stanza in the seventh spot with 27 points from 18 games while Wolves are 16th on the league log with 20 points from 18 matches.

At the Ondo State Sports Complex, Akure, Sunshine Stars returned to winning ways after their away loss to Heartland with a 2-0 win over FC IfeanyiUbah.

It threatened to be a goal fest after the Owena Whales scored twice under 30 minutes through Jide Fatokun and Anthony Omaka in the 24th and 30 minutes but the home team couldn’t muster up the boldness to add to the goal tally.

Sunshine Stars with Kabiru Dogo at the helm ended the first round in the fourth position with 30 points from 19 games while FC IfeanyiUbah ended theirs in 12th spot with 24 points from the same number of games.

MFM at the Agege Stadium, Lagos started life under a new manager with a comeback  from behind win over Kano Pillars.

Sai Masu Gida who were hoping to extend their unbeaten streak met their Waterloo against plucky Olukoya Boys who were out to turn things around after their midweek home loss to Enyimba. The fans at the Agege Stadium were shell-shocked when Auwalu Ali Malam got the curtain raiser in the 34th minute against the run of play but MFM fought back in the second half and scored three goals through Adewole Adeniji in the 52nd minute and Clement Ogwu who netted a brace in the 65th and 81st minutes.

MFM finished the first round among the top 10 teams as they amassed 26 points from 19 games to place eighth while Kano Pillars are 10th with 24 points from 17 games.

At the Yakubu Gowon Stadium, Port Harcourt, Rivers United relied on the 67th minute goal of Ivorian import, Konan N’gouan got from the penalty spot to scoop the available three points against Kwara United.

Stanley Eguma’s Pride of Rivers finished third at the end of the first stanza with 32 points from 19 games while Kwara United are in the 13th spot with 23 points from 18 games as the curtain fell on the first round games.

The Pride of Benue surprisingly were beaten 1-0 by Jigawa Golden Stars in Kano in the last fixture but they silent the Savannah Elephants through two quickly converted goals by Utibe Arit Archibong and Austin Ogunye in the 10th and 20th minutes with the latter coming from the penalty spot.

Wikki reduced the goal arrears in the 90th minute through Nasiru Jubrin shortly after they were reduced to 10 after Yinka Onaolapo got the referee’s marching orders to make it a fascinating end in Makurdi.

Lobi Stars ended the first round as the league leaders with 35 points from 19 games while Wikki Tourists with Usman Abd’Allah in charge are 14th on the league table with 14 points from 18 games.

At the Pantami Stadium, Gombe, Jigawa Golden Stars made two victories on the bounce after they pipped troubled Nasarawa United 1-0.

Kalla Ali proved to be the matchwinner after he struck just on the stroke of halftime and it was what they needed to garner all points in the clash between two relegation battlers.

Jigawa Golden Stars are 17th on the log with 20 points from 18 matches while Nasarawa United are stuck at the bottom of the table with 16 points from 18 games.