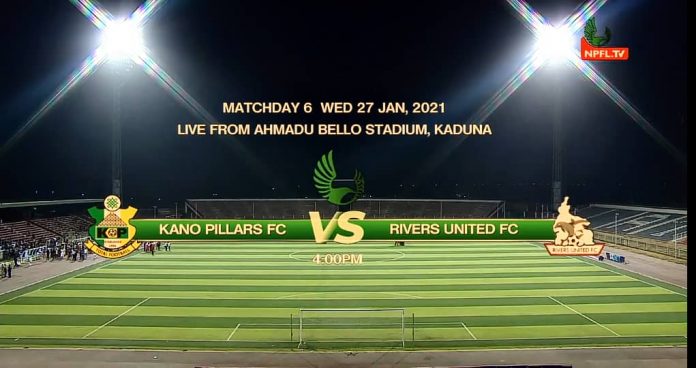 Rivers United FC tasted defeat for the first time this season in their last away game against Wikki Tourist on match day four of the Nigeria Professional Football League (NPFL).

That reverse in Bauchi left a bitter taste in the mouth of many a Rivers United faithful but Super Eagles and Rivers United’s defence marshall Ifeanyi Anaemena believes the “Pride of Rivers” are not in Kaduna for a jamboree.

“It’s going to be a tough game, knowing that Rivers United has been in a very good shape and Kano Pillars is a very good side that they try to dominate when it comes to their home. So I think it’s going to be a massive one but truthfully I have to be certain that we are going to come out with a positive result at the end of it.
It’s a very important game because we know what is at sake, we are not here for a jamboree as our coach will always say”- he revealed in an exclusive interview with the Rivers United FC official website.

“To be honest the match is very important for us because you know the pedigree of Rivers United at the moment and we try to maintain it being a team playing in CAF and secondly, we are second on the log, Nasarawa is ahead of us and for us to get back to the top of the table, we will need to win the game. We need this match to get back to the table and make sure that we demolish Adamawa United after this game by the weekend. This match is so important to us to keep our winning streak up, we really need to win this match.,” he said.

Anaemena’s sentiments about how important it is to earn a win over Kano Pillars appear to be based on solid foundations.

“We have been doing well in CAF and it’s a good one for the team Rivers United, the expectation is too high for Rivers United both in CAF and the NPFL and I think there is no much pressure on the team, the only thing is that you know to get to the top is easy but to maintain yourself when you get to the top is anything. So we are trying to make sure we maintain the tempo and keep our winning streak up. It always a very good outing for us whenever we play away. I think we are good when we are at away playing so we are going to make sure that we get a good result here in Kaduna in other to keep our winning streak up.”

Chinedu Ike has looked extremely lively in the colours of ‘Sai Masu Gida’ this term forming a formidable partnership in the middle with Rabiu Ali. Pillars will be hoping that one of the most exciting attacking prospects in the division, Ogoni born Nwagua Nyima knows his way to goal on Wednesday.

A potentially special game for the ages awaits.

Live coverage
There will be robust coverage of this game by our media team (that will include videos and photos from the venue) simultaneously via our official Twitter account (@RiversUnitedFC) and official Whatsaap channel from 3:15pm on match day.
You can also watch live on NPFL TV App & the NTA.