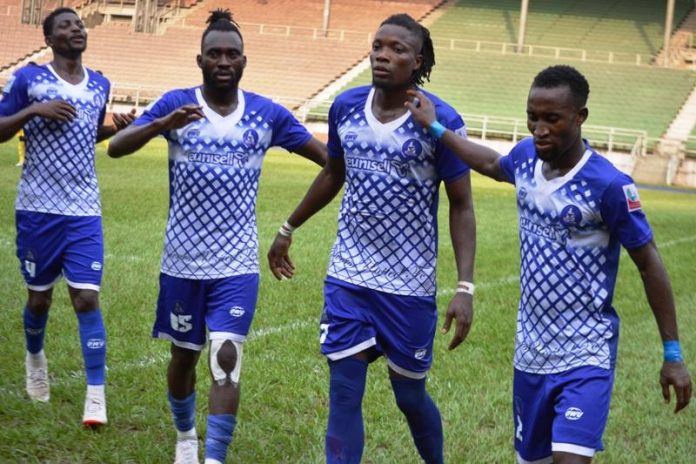 Rivers United moved back to top of the summit with a lone goal win at home to visiting Adamawa United , while Imama Amapakabo seems to had salvaged his job after his side earned a point in Markudi, in a matchday that saw 14 goals and registered no win away from home.

The pride of Rivers were lucky to have left the game with their heads high, after midfielder Godwin Aguda missed a penalty ten minutes before the break. They however put the game in the shoves courtesy of Fortune Omoniwari’s goal on 53 minutes.

Eight time champions, Enyimba of Aba almost suffered similar fate in Aba, when Tosin Omoyele’s penalty on 33 minute was parried to safety by Katsina United’s goalkeeper, Yusuf Muhammed. The former Plateau United forward would redeem himself, securing the winner for the Elephants just before the break.

At the Aper Aku Stadium, Makurdi, Imama Amapakabo’s Abia Warriors held Lobi Stars to a barren draw, in the last of three games ultimatum given to the former Rangers’ handler. Similar result was recorded between MFM FC and Kwara United at the Agege Stadium.

Sunshine Stars were the biggest winners of the matchday, with goals from Sadeeq Yusuf– his fifth of the campaign, Fuad Ekelojuoti and Chinedu Udechukwu helping them to a 3-1 win at home to Rangers of Enugu. Former Akwa United winger Godspower Aniefiok got the consolation for the Flying Antelopes.

Uzochukwu Ifejiofor’s header in the 17th minute was the difference between FC Ifeanyi Ubah and Wikki Tourists in Nnewi, while Ndifreke Effiong’s goal from similar fashion earned Akwa United three points against Kano Pillars at the Godswill Akpabio Stadium, Uyo.

There was late drama in Kaduna, as Jigawa Golden Stars rallied to secure a win at their adopted home ground against Heartland FC. Bright Onyedikachi had struck first for the visitors on 82 minutes, before Saidu Abdullahi leveled terms two minutes later. Samuel Stone sealed the win a minute before regulation time for his fourth goal of the season.

Aniekan Ekpe’s double on 38 as 53 minutes helped Dakkada FC to a 2-0 win at home to Warri Wolves, while Plateau United secured a lone goal victory at him to Nasarawa United on Friday with Mohammed Zulkifilu’s 36th-minute strike enough to put an end to the Solid Miners’ unbeaten start to the season.