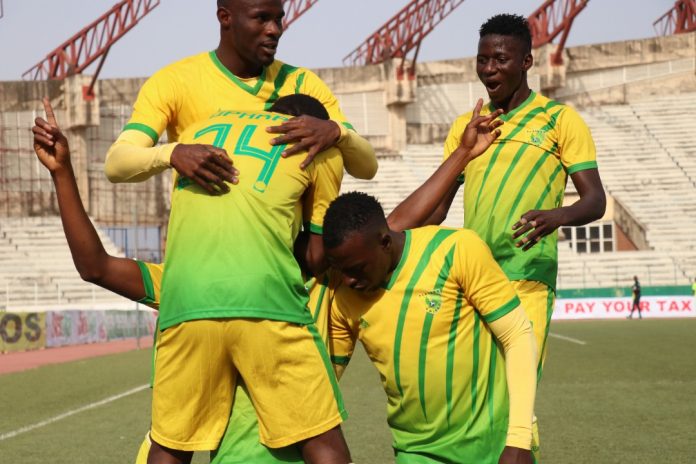 Rivers United and Plateau United continued to march on in their bid to wrestle home the league crown at the end of the season with morale boosting away victories while Mountain of Fire and Miracles Ministries and Kwara United bagged away draws as the Nigerian topflight league entered Matchday 16 on Wednesday.

At the Ahmadu Bello Stadium, Kaduna, Nyima Nwagua visited familiar ground with his new team, Rivers United and it was his goal in the 70th minute that haunt ex-club, Kano Pillars and confined them to second home loss this season.

Nwagua made Kano and later Kaduna his fortress for Sai Masu Gida for several years but it was his attacking instinct that fetched the Pride of Rivers the maximum points. He dispossessed Goalkeeper, Idrissu Ibrahim off the ball when he attempted to dribble him and slotted the ball into an empty net.

The win restored Rivers United’s lead at the top of the table with 35 points ahead of Plateau United who are breathing down their neck in the second spot. Stanley Eguma’s men are unbeaten since Matchday 11 when they surrendered their unbeaten start to the season to their biggest nemesis, Plateau United 1-0 in Jos on February 6th.

At the Aper Aku Stadium, Makurdi, Lobi Stars suffered their first home loss of the season to in-form Plateau United who defeated them 2-0.

Fidelis Ilechukwu tutored side were in the ascendancy in the 32nd minute before Albert Hilary’s stoppage-time goal nailed the Pride of Benue’s coffin in the 91st minute.

Plateau United remain in the second spot with 34 points and are unbeaten in the past six games. They have won five of those games but Lobi Stars are 13th with 19 points.

NPFL reigning champions, Akwa United made it successive home win for the first time since January 16th with a comfortable 2-0 victory over Wikki Tourists at the Godswill Akpabio Stadium, Uyo.

The Giant Elephants held the Promise Keepers to a goalless draw in the first half but the Bauchi side lost stream in the opening minutes of the second half and allowed their hosts to score twice within a minute through Adam Yakubu and Leo Ezekiel in the 49th and 50th minutes. Akwa United crawled to the fourth spot with 26 points by virtue of the win but Wikki remain at midtable with 23 points.

Alao Danbani was on the score sheet for the second game running when he struck in the 19th minute to give the Harmony Boys a shock lead but Michael Tochukwu bailed the Solid Miners out with the equalizer in the 64th minute. It was Tochukwu’s third goal in Nasarawa United’s last three games.

Sunshine Stars returned to winning ways barely three days after the surprise loss to MFM in Lagos with a 3-1 home win Heartland FC whose mini revival under Erasmus Onuh Ollottah suffered a snag.

It was a former player of the Naze Millionaires, Leonard Ugochukwu Aputazie who orchestrated their first defeat in six games with two goals in the 2nd and 34th minute before Vincent Temitope restored the two goal cushion in the 93rd minute. Nonso Nzediegwu sublime finish in the 78th minute for the Owerri had threatened a fightback before the Owena Whales’ third goal expunged feeling of a possible comeback at the Otunba Dipo Dina Stadium, Ijebu Ode. Aputazie has now scored six goals this season.

The home win has seen Sunshine Stars leap to the eight spot with 23 points while Heartland FC are in the 18th position with 16 points.

At the Muhammadu Dikko Stadium, Katsina, Katsina United ended their three game winless streak with a 4-1 triumph over Dakkada FC.

Goalkeeper, Thomas Omokhudu punched Abbar Umar’s cross into his net in the 10th minute for the Changi Boys’ opener before Chibundu Amah doubled the advantage in the 29th minute. Adewale Lasisi halved the deficit for the Chosen Ones in the 51st minute but two more goals via Madaki Alkali Dauda and Aliyu Musa in the 72nd and 88th minutes made it an emphatic finish for Azeez Mohammed led side.

Katsina United are in the 17th spot with 17 points while Dakkada FC are 19th with 15 points.

At the Enyimba International Stadium, Aba, Enyimba bagged their first maximum points in five games after a 2-1 home win over Remo Stars. It was the People’s Elephant’s first win in Aba since Matchday 9 when they defeated Katsina United 2-1.

Former players of Remo Stars Victor Mbaoma and Ekene Awazie both scored for Enyimba in the 37th and 49th minutes but Nduka Junior halved the deficit in the 70th minute form the penalty spot.

Niger Tornadoes were held to a 1-1 draw by MFM who by virtue of the point earned in Abuja secured their first away point of the season.

Richie Eguavoen put the Church Boys in the lead in the 15th minute but Kabiru Adeniji equalised in the 37th minute for Ikon Allah Boys.

Gombe United pipped Abia Warriors 1-0 through the strike of William Ukeme which came 20 minutes from time. Ibrahim Yahaya with the assist. The win takes the Desert Scorpions’ points tally to 23 as they moved to the ninth spot but Abia Warriors are in the 15th spot with 17 points.

Meanwhile, at the Lekan Salami Stadium, Ibadan, Shooting Stars could only settle for a 1-1 draw against Enugu Rangers in a tie played under floodlights.

The Flying Antelopes scored first in the stoppage period of the first half through Elijah Ani but the Oluyole Warriors leveled the proceeding in the 56th minute through Chinedu Enuademu.

Rangers slipped to the 6th position with 24 points while Shooting Stars are 12th with 19 points.