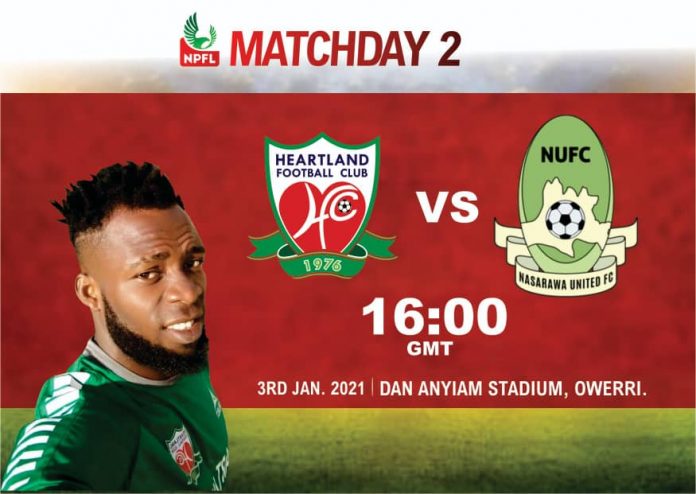 Having played at Okigwe Township Stadium for the past two seasons, Heartland FC are set to return to their ancestral home ground, the Dan Anyiam Stadium Owerri when they slug it out with Nasarawa United in a pulsating NPFL Matchday 2 tie on Sunday.

The Scientific Boys have defeated the Solid Miners in four out of their last five meetings in the league, with the visitors securing just a win meaning no share of spoils has been recorded since the 6th of August 2016.

Despite losing their first league game of the season 3-2 away to Katsina United last weekend, the Naze Millionaires are geared towards making a promising start to life on their return to the Dan Anyiam Stadium, Owerri.

Meanwhile, Nasarawa United Gaffer Bala Nikyu tutored his team to a 2-1 win against Wikki Tourists at home on the opening day of the season, and will be hoping to soar over Coach Fidelis Ilechukwu who started life as Heartland coach with a 1-0 home loss to MFM last season.

Speaking to Heartland Media, Asst. Coach Ezekiel Onyegbule, believes the team will go gunblazing in quest for glory but acknowledged that no team is a walk in the park.
“The players will give their best to pick up victory because the team is really home(Dan Anyiam) and we’re going to do better than we’ve been doing before.
coming home is a morale booster for the team, it won’t be easy but we will come out victorious”.