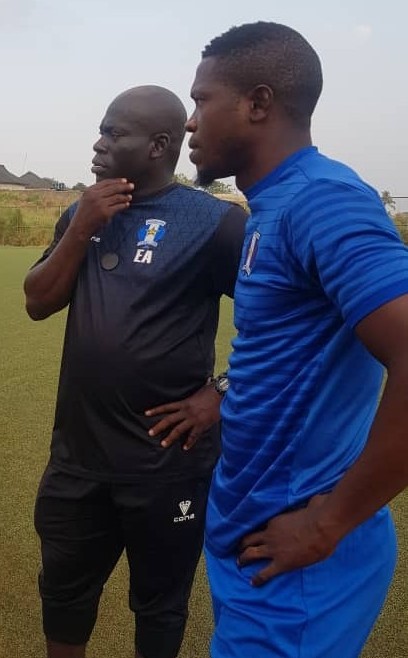 Although his side sits comfortably atop the log, aftet winning all five games, the 3SC sweat merchant, reckons the game is a must win tie for his side, as they continue the campaign for promotion.

Dynamite, who are placed sixth on the log, having managed to garner seven points from five matches, might be struggling in the five week old 2020/21 season but ‘Esin’, as the Oluyole Warriors chief tactician is called believes beating them will not be easy.

“The game against Dynamite is very important to us. We need to get the three points on Sunday to further hold the grip at the top. It won’t be easy but we will definitely get it”, said the forner Shooting Stars forward.

Coach Agoye, on a general note, explained that his team, will do everything possible to keep the momentum, stresssing that it is still a long way to go as far as picking the promotion ticket to the NPFL is concerned.

Meanwhile, skipper of the Oluyole Warriors, Omololu Waheed, said the players will not lose their heads due to the good run they are having so far.

The 3SC central defender while speaking with Shooting Stars Media after Thursday’s three nil win over Osun United, revealed that he and his colleagues were fully ready to continue with ttheir blistering form till the end of the race.

“We are happy that we are making our people happy with our outstanding performance but the road to achieving the ultimate goal, which is promotion is still far that is why we are not going to lose concentration.

“Against Dynamite on Sunday, we are looking forward to yet another win, to extend our lead on the log. Winning is all we think about, we are not ready to drop any point and this is the mentality we are taking to the pitch on Sunday”, the experienced defender stated.