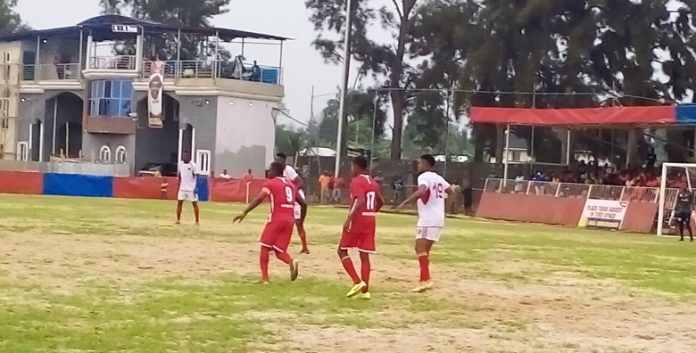 Enyimba Feeders picked up the first victory of the Nationwide League One Division One playoffs for Ngor Okpala Centre on Tuesday at the Honourable Onwubiko International Stadium, Ngor Okpala after a nervy tie with Goddosky International FC of Nnewi.

The People’s Elephant cadet scored the first goal of the Ngor Okpala centre when Udochukwu Okorie got the curtain-raiser in the 10th minute. But Goddosky regrouped and bagged the equaliser in the 31st minute through Ifenna Okoye and raced ahead in the game in the 63rd Shedrack Charles. A brace from Emma Godwin in the 70th and 85th minutes turned the tide for Enyimba Feeders.

Chidera Pius opened the game’s account of goal in the first minute of the encounter for Lamray FC when he capitalised on Udala’s defensive mix up to score. Udala’s skipper Onyekachi Onuorah equalised from the penalty kick in the 22nd minute after an infringement in Lamray FC goal area.

Pius notched his second of the game for Lamray FC after he lobbed the ball from the right flank over an onrushing Udala goalkeeper who had left his goal posts in the 68th minute but Udala benefitted from the one man advantage they had over their foes to level the scores in the 79th minute.

Lamray and Udala are tied on one point each after their first game. Udala FC will trade tackles with Enyimba Feeders next Thursday while Lamray United FC have a date with Adoration FC in a local derby also on Thursday.

Chinedu Sunday, Ikechukwu Iboko and Uzochukwu Nwabueze netted for Adoration FC in the 25th, 56th, and 80th minutes while Kemaks Iwuagwu nice strike from the freekick was a consolation for the Flying Antelopes in the 79th minute.