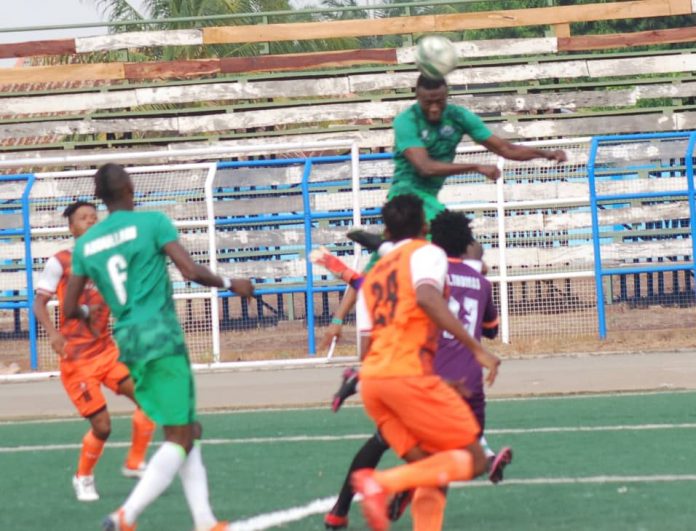 Nasarawa United FC, on Thursday evening, returned to the top of the Nigeria Professional Football League table following a 3-0 whitewashing of their guests, Dakkada FC of Uyo.

Consistently-improving Ikenna Offor opened the goals floodgates after sending Dakkada’s goalkeeper, Thomas Omokhudu, the wrong way from the spot in the sixth minute after mobile winger, Aliyu Abdullahi was brought down inside the box.

The visitors, in a bid to absorb the shock, turned defence to attack. Archibong Philips spinned around Tebo Franklin but his close range shot couldn’t cause any harm to Danlami Umar in goal for Nasarawa United.

The Solid Miners made the first-half unassailable for “the Chosen Ones” as Dakkada FC are nicknamed. Ikenna Offor increased the tally courtesy of Chinedu Ohanachom’s pass, and his second for the evening as United went into the break with a 3-0 Lead

Immediately after the interval, Dakkada threatened the United’s goal area with a freekick but the eventual kick was well curtailed.

United almost scored a forth goal after Aliyu Abdullahi was brought down in the area, but the referee thought otherwise and instead a freekick was awarded against him.

Though changes were made by both sides, they would make no further effect in the game as the Solid Miners rejected the “Chosen Ones”, at the Lafia City Stadium.

Three goals and three crucial points and United go on top of the league table on goals difference, with 27 points from sixteen games.

Ikenna Offor was voted Man-of-the-match as the energetic midfielder now has four goals to his name.

The Lafia-based side next play the Flying Antelopes, Rangers International of Enugu at the Nnamdi Azikwe Stadium, Enugu, on Monday, 21st March, 2021.

Coach Bala Nikyu(NAS): “It was a good match, not because we won, but because both teams played well.

“There’s nothing to rejoice about topping the table now.

“As far as I’m concerned, goals difference can’t be what to count on. But if we were on top leading with points, then I would be happy -there’s still work to do.

“All we need from our fans now is to keep supporting and praying for us.”

Coach Umar Danlami Kwassau (DAK): “It was a good game because we didn’t play badly.
“They(Nasarawa United) had their chances and they took them, while we couldn’t convert ours.

“We lost the game at the very beginning because those goals were careless.

“Generally, the better side won and good luck to them.

“We will go back home to prepare ahead of our next game against Plateau United.”

Ikenna Offor (NAS/MVP): “I feel very much have because I have been working hard towards achieving what I am achieving now, and by the grace of God, I will keep doing my best.

“My personal target as a player is for me to help my team qualify for the continent and to also keep scoring goals.

“Dakkada are a very good side, but it’s just that we came up with a different game plan which I believe they didn’t understand.”

Golden Eaglets through to WAFU U17 Cup semi finals