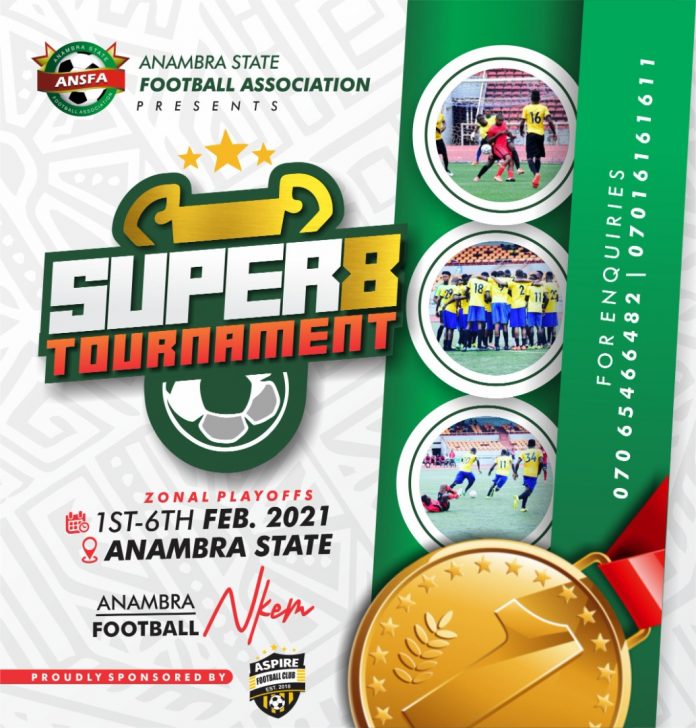 The Anambra football Association (ANSFA) has called for entries from teams interested in participating in the inaugural ‘My Anambra Football’ Super 8 tournament set to hold in February 2021.

The organising committee of the tournament headed by Oliver Ndigwe through the FA secretary, Chijioke Onyedika recently released the timetable and guidelines which showed that the tournament will start with zonal playoffs to produce the 8 teams to take part in the State tournament.

The State FA believes that the future of football resides in the grassroots and in recognition of this fact the Super 8 which is to be the flagship grassroots tournament will cut across all the three senatorial zones of the State.

It will first involve zonal knockout competitions comprising 16 teams in each zone, with the best two teams in each qualifying for the Super 8 proper at the state level.

The zonal playoffs are scheduled to run from February 1st-6th 2021.

‘My Anambra Football’ Super 8 tournament is expected to hold in late February of which a substantive date will be set at the conclusion of the zonal playoffs.

The tournament organised by the State FA and sponsored by Aspire football Club, Adazi-Ani will see the winner grab an already acquired Nationwide League Division 2 slot plus a cash prize of five hundred thousand Naira (N500, 000) in addition to a giant trophy, medals and sets jerseys.

The annual tournament according to Amakom Augustine Okoye is Aspire’s way of ensuring football’s development in the state.

It is expected that the final of the tournament will be staged in grand style inside the New Awka City Stadium set to be completed.

2021 Africa Cup of Nations: Eagles cruise to second round .Chukwueze,...