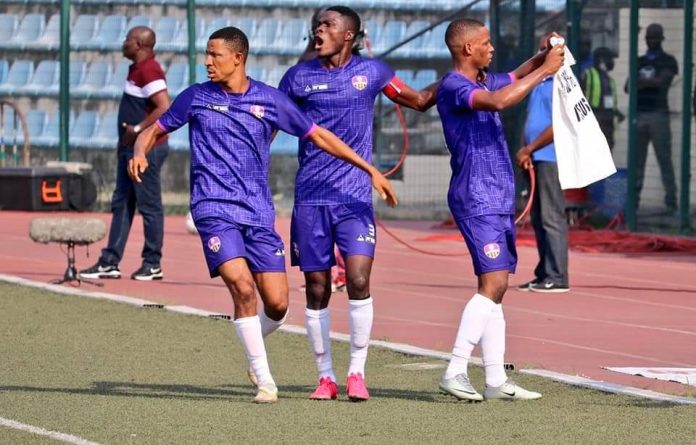 A well-drilled Sunshine Stars FC side were left to rue their luck and missed chances following a 1-0 defeat in Sunday’s Southwest derby meeting with MFM FC at the Soccer Temple, Agege Lagos.

Dennis Obasi guided home from a low cross in the 7th minute to hand the Olukoya Boys the advantage, with the visitors unable to turn things round despite dominanting after falling behind.

The opening half saw far less clear-cut opportunities, nevertheless the Owena Whales muster a real chance at equaliser minutes before the break, when Tolu Oluwole combined well with Waheed Adebayo only for the later to be denied by Osayi Kingdom in goal for his former side.

There was greater intent and tempo about the coach Gbenga Ogunbote tutored side play after the interval as they were able to carved out several openings in the hosts backline with some eye-catching team moves.

First in the 72nd minute, Yusuf Sadeeq drew Kingdom out of position, however fellow second half substitute Kolade Adeniji was denied the chance of turning home his cross by some desperate MFM defending.

Sunshine Stars with renewed sense of urgency continued to attack vigorously in pursuit of a leveller and 11 minutes from time Sadeeq miscued from Fuad Ekelojuoti’s cut-back header in front of goal, young sensation, Ayo Adejubu had left several markers for dead in the build up.

In the 84th minute, Sadeeq was again denied with a decisive goal mouth clearance, before seeing his header from six yards out, off Ekelojuoti’s cross stopped agonizingly by the wood work in stoppages time.

Coach Gbenga Ogunbote and Sunshine Stars captain for the NPFL 2020/21 match day three clash, Ariyo David faced the media after the contest and both submitted the defeat was undeserving.

Ogunbote: “The game has been won and lost and you see sometimes you pay dearly for carelessness. All we need to do now is to go home with the positives.

“Unfortunately this is not a game we should have lost. We still have 35 more games to play, we will go back home and try to be better next time.”

Ariyo: “We feel bad because we really prepared well for this game and we were well motivated before coming for this game; the management tried.

“We can see luck was just against us, but we will go back to the drawing board, the coach knows what to do before our next game”