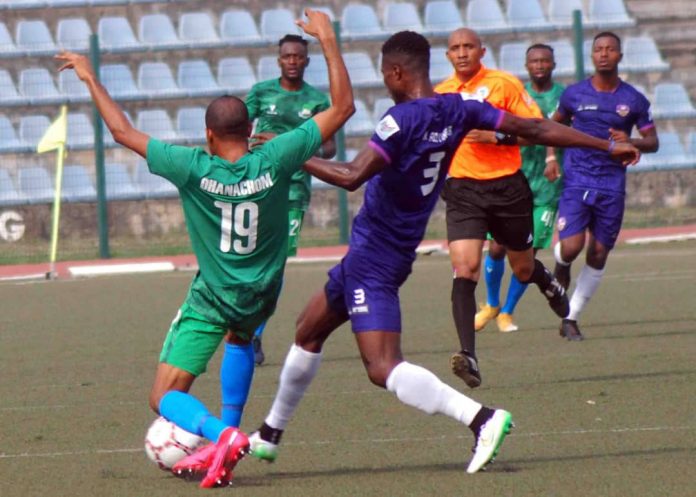 The Solid Miners, this evening, at the Agege Stadium, Lagos, narrowly lost 0-1 to MFM FC in the final game of the Nigeria Professional Football League matchday thirteen tie.

MFM FC’s, Akani Elijah’s fierce shot was inadvertently diverted into the back of the net by Nasarawa United’s skipper, Danlami Umar in the 52nd minute for the only goal of the match.

In a game mostly dominated by the visitors, the quartet of Adamu Hassan, Ikenna Offor, Haggai Katoh and Chinedu Ohanachom all came closest to scoring, but got denied by the goalkeeper, Folarin Abayomi.

Before heading to the break, Chinedu Ohanachom got his goal ruled out by the linesman after he was adjudged to be in offside position.

Despite the result, United remains in 6th position with twenty points while MFM moves to 9th with seventeen points.

Nasarawa United will host Lobi Stars FC of Makurdi coming Sunday in Lafia, a game which is dubbed the “North-Central derby”.

Bala Nikyu (NAS): “The game has been played – lost and won, and that’s it!

“Any game you lose, you wouldn’t say you did well, even if you dominated possession. It’s all about three points.

“There was an ill-luck on our side. MFM didn’t outplay us.

“From the look of things, we have to make our next home game count.”

Olalekan Gabriel (MFM): “I am so happy. Kudos to my boys, we all did it.

“Technically, I told my boys during the break that this is like a cup final and we nothing to lose than to just win the game, and I’m happy that they listened to me.”