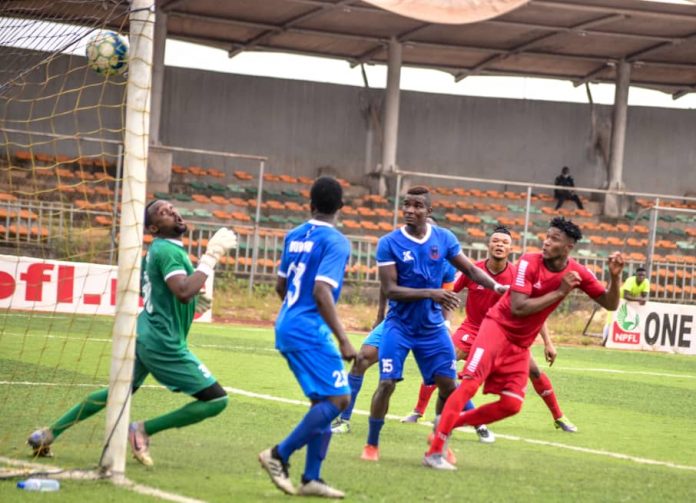 Two goals in either half from Chidera Eze in the 38th minute and Samuel Nnoshiri’s header on the 58th minute was enough to saw off the ‘Pride Of Benue’ and stretched the Naze Millionaires unbeaten run to three games.

Coach Fidelis Ilechukwu made two changes to the starting lineup that defeated MFM in Lagos, Orji Kalu started his first game of the season in the heart of the defence replacing Kenneth Ikwugbado, while Kelechi Chimezie who assisted Nnoshiri’s goal debuted for the injured Ayo Adetola.

The Scientific Boys who controlled proceedings and possession will rue their missed chances to better their advantage but will consolidate on the momentum of the team’s effort to shut out the attacking threat of Lobi Stars led by their former player Chinonso Okonkwo, in what was Heartland second clean sheet of the season.

Heartland Coach Fidelis Ilechukwu said after the game that the introduction of fresh legs to his team was instrumental for the victory while acknowledging the role played by Governor Hope Uzodinma towards the lifting of the transfer ban from FIFA.

“yeah it is important and at the end of the day, I want to, first of all, say a big thank you to His Excellency Governor Hope Uzodinma for what he has done for the team, because as you can see, there is a lot of quality, experience in the midfield and as well in defence,” Ilechukwu told journalists.

” If you have a player like Orji Kalu in defense I think you must have confidence, you must have believed, you must relax on the bench to watch football, because in football when there is no leader you will be having issues. As you can see today he commands, he worked, he directs, am so happy about that.”