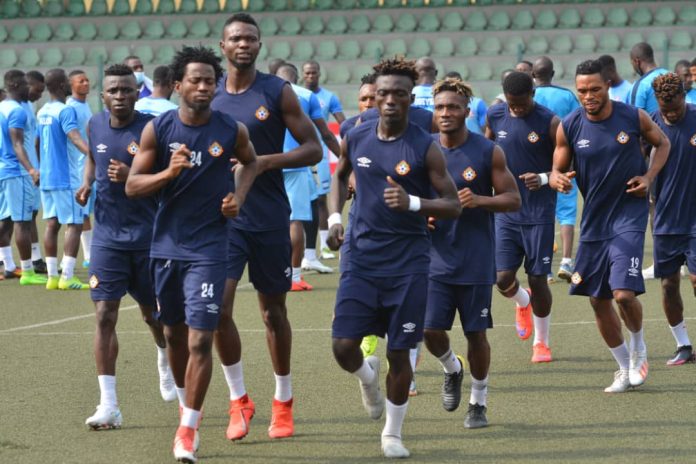 Impressive Kwara United will continue their campaign this term in the Nigerian Professional Football League on Wednesday as they will be facing visiting Lobi Stars in NPFL week 8 encounter.

Biffo and his wards will be going into this battle against Kabiru Dogo led side with their morale boosted having picked important point in Agege against MFM and have gone four-game unbeaten.

Lobi Stars on the other hand drew their last home game against Abia Warriors and they would want to seek redress in Ilorin against the Harmony Boys.

Ardent Kwara football fans are still nursing the pains Lobi Stars inflicted on them last season when the Makurdi based side defeated Kwara United in what was an heartbreaking loss and will be delighted the Pride of Benue are caged in Ilorin on Wednesday.

But this time around, Lobi Stars will be facing a no nonsense Kwara United team who are having experienced goalkeeper Dele Aiyenugba at his imperious form having roled back the years to help galvanise the Harmony Boys with four successive clean sheets.

In history, Kwara United and Lobi Stars have met 17 times in competitive football with the Harmony Boys winning five games, while their midweek opponents have won 8 with the remaining four games ending in draws.

Abdullahi Biffo and his men must also be reminded that Kwara United have not beaten Lobi Stars in their last four games, and the last time the Ilorin based club beat the Stars was on February 1, 2018, through Stephen Alfred’s ninth-minute effort.

United gaffer Biffo is however optimistic that his players will record an emphatic win over Lobi Stars on Wednesday.

“We know that the game against Lobi Stars will be tough for us tomorrow (Wednesday), but we are ready for them and the three points is what we will get by the grace of God.

“My players are in good shape and they can’t wait for the match against Lobi Stars to come,” Biffo explained to Kwara United media team.

Meanwhile, Kwara United will be traveling to Akure after the tie against Lobi Stars where they will face Sunshine Stars in NPFL week 9 duel.