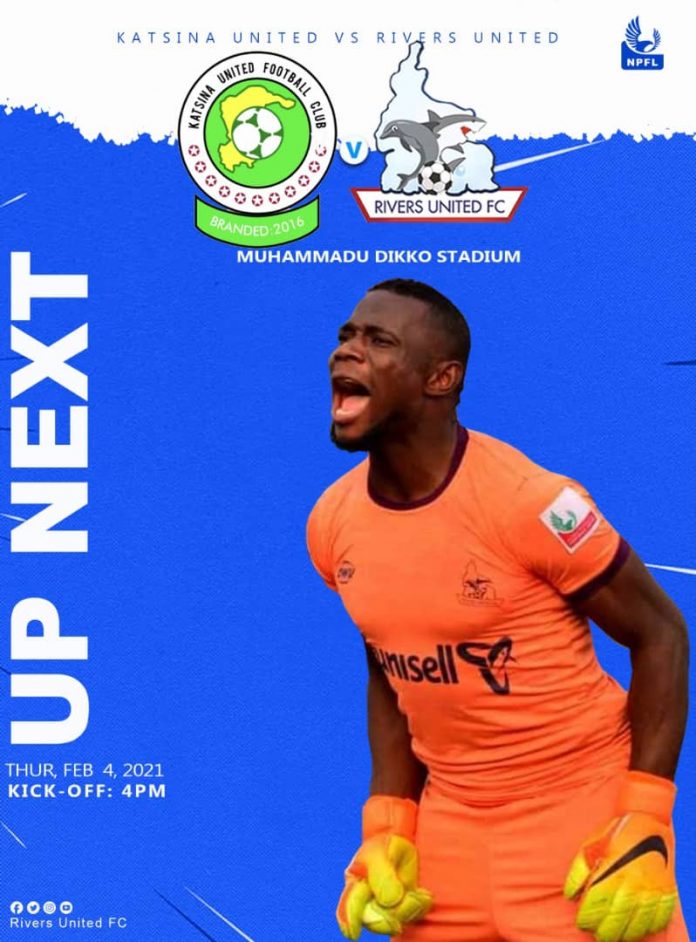 Rivers United continue their 2020/21 Nigeria Professional Football League campaign with one of their longest trips of the season to Katsina United on Thursday evening.

The “Pride of Rivers” visited Muhammadu Dikko Stadium Katsina as recently as 14th April 2019, when they were unfortunate to end up losing 2-1, despite putting up a strong challenge against the host.

There will be robust coverage of this game by our media team (that will include videos and photos from the venue) simultaneously via our official Twitter account (@RiversUnitedFC) and official Whatsaap channel from 3:15pm on match day.

Rivers United have a number of confirmed absentees and injury doubts ahead of Thursday’s game.

Technical Adviser Stanley Eguma will find replacement for forward Bobby Clement who missed Sunday’s NPFL Matchday 7 win over Adamawa United with an injury but, following treatment, the manager believes he will be ready for Thursdays clash against Nasarawa United.

Meanwhile, Fortune Omoniwari who was substituted in the last game against Adamawa United as precaution returned to the training pitch himself raising the prospect of him facing Katsina United.

Oshobe Shuji looks set to continue in midfield duties after a very impressive showing in the 1-0 win against Adamawa United. Pacy winger Ishaq Kayode, whose first touch of the ball resulted in a super assist that led to Fortune Omoniwari’s match winner in United’s last match will be the cynosure of all eyes.

Assistant captain Chigozie Ihunda remains a doubt as he is yet to regain full fitness after being out for days,

Destiny Ashadi return to a city where he was virtually worshiped because of what he was able to achieve with Katsina United.

Despite a spirited performance in their last NPFL game against Enyimba which ended in a 1-0 lose, Coach Baldwin Bazuaye will seek to get his first point since taking over the helm of affairs for the “Changi boys”.

Goalkeeper Yusuf Mohammed will continue in goal after putting up a decent showing against Enyimba including saving a penalty in Aba.

Followers of Katsina United will be hopeful that forwards Raheed Ahmed and Usman Barau find the road to goal against Rivers United while Gambo Mohammed will be hoping to put up a decent showing against a team he once played for.

Katsina United and Rivers United have met 6 times down the years.

So, in short, the “Changi Boys” have had the edge over Rivers United down the years!