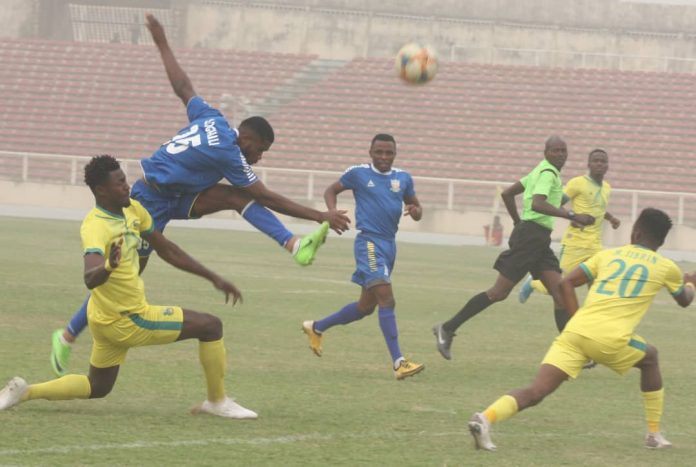 Two penalties one in each half denied spirited Heartland FC a share of the spoils in their Matchday 18 of the Nigeria Professional Football League played against Kano Pillars at the Ahmadu Bello Stadium, Kaduna on Sunday.

The Naze Millionaires barely managed to honour the tie after a last-minute change of heart from their five days strike action embarked upon by the players to agitate for the release of their unpaid wages.

Www.dasportstainment247.com reports that sanity prevailed when egg heads of the Imo House of Assembly led by Speaker, Rt Hon. Paul Emeziem and his Deputy, Rt Hon. Amara Chyna Iwuanyanwu and others interceded and arrangements were made to start paying two months of the salary arrears after the 46 million naira intervention from the Imo Government last Thursday. A few numbers of the players acknowledged the receipt of the cash that is superintendent by the Ministry of Youth and Sports under the auspices of Honourable Dan Ogu. More are expected to get theirs today.

Armed with the latest motivation, Heartland FC players with the head coach, Fidelis Ilechukwu never approached the game like a team in crisis or like a team that was playing for the first time since last Sunday in their lacklustre 1-1 home draw against Warri Wolves.

The players made amends for the lost time and put their bodies on the line with the determination not to return to Owerri without at least a point. It was as if they were set to achieve that when they drew the first blood in the 39th minute through impressive right back, Chidera Eze who has now scored three league goals despite being a defender.

Heartland FC were on the cusp of taking the 1-0 advantage to halftime but the centre referee had other ideas. The referee blew for an infringement in the Naze Millionaires’ vital area when Kano Pillars’ player fell under little or no challenge in the 45th minute. Rabiu Ali stepped forward and drilled the ball to the top left corner of Goalkeeper, Ikechukwu Ezenwa who guessed the penalty kick correctly.

At the resumption of the second half, it became a ding dong affair and with a raft of changes made by both teams it was right to say that Heartland FC players were comfortable with shared spoils but Sai Masu Gida players continued to prey open the defence of the visitors with the hope of securing the winning goal.

Heartland FC were reduced to 10 men when Shedrack Oghali was adjudged to have pushed Kano Pillars’ player while both were trying to gain ball possession in the 81st minute. The one-man disadvantage proved to their albatross as they conceded a late-minute penalty kick. It was converted by David Ebuka in the 93rd minute.

What the result mean for both teams

Kano Pillars will host Warri Wolves at the Ahmadu Bello Stadium, Kaduna on Sunday in a second consecutive home game while Heartland FC will be at home to bottom-placed Adamawa United also on Sunday.