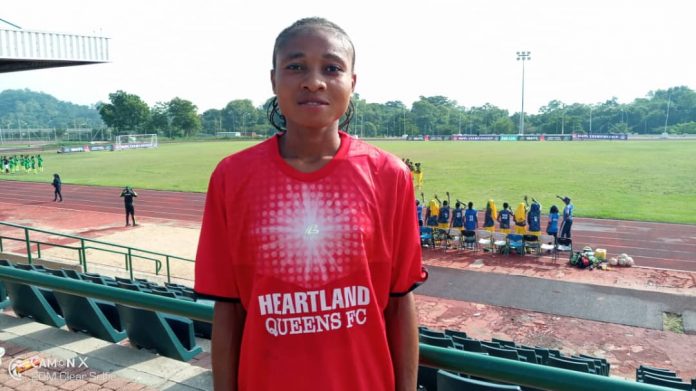 One goal in each half off the foot of the duo, Joy Nkoro and Angela Okechi ensured the 10-man Owerri landladies claimed their first victory in the NWFL second tier competition on Saturday at the Aguiyi Ironsi Sports Complex. Heartland Queens central defender, Ekaette Akpata was handed a straight red card quite early in the second half for an innocuous challenge on the onrushing Army side player.

Prior to the matchday 3 clash emphatic victory the former top-flight shared the spoils with Kwara Ladies in the championship opener on Wednesday and surprisingly succumbed to a 0-2 defeat to Naija Ratels on Thursday.

“Actually, I am very happy, I must say I’m the happiest person on earth today because it was not an easy game but God made it easy for us. I am wholly excited with the hard fought victory.

“I just want to appreciate our coaches, teammates, and most especially the executive governor, Distinguished Sen. Hope Uzodinma and the Commissioner for Youth, Social Development & Sports, Hon. Dan Chike Ogu for a nice game today.

“Of course, with God on our side all things are possible concerning our game tomorrow (Sunday) against Adamawa Queens and chances of claiming one of the promotion tickets.

“It’s quite possible we outscore Adamawa Queens to brighten our chances of quick return to the Premiership.

“Though the match will be another serious and tough game but I’m assuring that we will come out victorious, that’s my sincerest prayer.

“Adamawa Queens are strong side with two wins from two matches, they have been doing quite well, too but I believe we can upset them, I strongly believe in my teammates to rise to the occasion to deliver the goods and we will surely emerge victorious,” said the Heartland Queens petite goal poacher.

Wokocha said her side will sorely miss the services of their suspended central defender, Ekaette Akpata in the all important match against Adamawa Queens.

“We will do our very best to ensure we win the match for her, it’s an honour we owe her and we will do it no matter the challenge,” said Wokocha.

Heartland Queens who will be rounding up her campaign in the championship with the clash against Adamawa Queens on Sunday are third on the five-team log on four points two behind leaders, Naija Ratels and will be hoping for a quick return to the topflight with a resounding win against Yola landladies.

Naija Ratels made a mince meat of Kwara Ladies with four unreplied goals in the second match of the championship and will be engaging Gallant Queens on Sunday while the llorin landladies will be on bye.