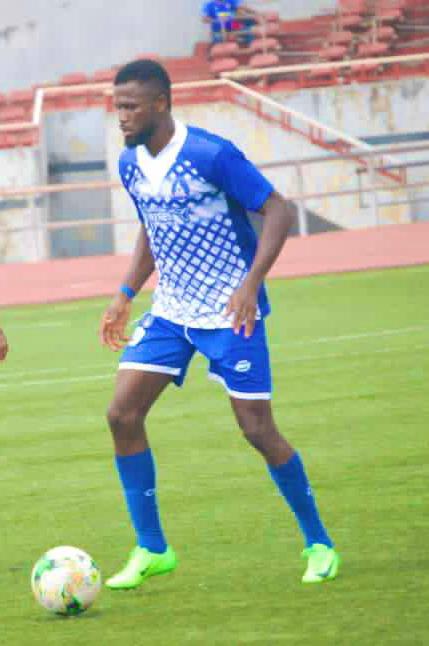 Rivers United’s new acquisition, Shedrack Oghali produced a sensational performance on his return to former Heartland FC and the turf he knows too well, Dan Anyiam Stadium, Owerri to deny the Naze Millionaires the maximum points in a league tie played on Sunday evening.

Chijioke Akuneto put Heartland FC in the ascendancy in the 40th minute off Chizoba Amaefule’s long throw-in which was half-cleared by Rivers United’s defence. The Pride of Rivers responded immediately in their first attacking forays after the home team’s goal. Shedrack Oghali with his first of two goals a minute later from a goalmouth scramble.

The Naze Millionaires shot ahead again in the 53rd minute through Chukwudi Nwaodu who curled a wonder goal beyond the reach of Goalkeeper, Okeimute Odah from about 20 yards after a good interchange of passes between him and Ogbonna Onuoha. But the Port Harcourt side equalised again through Oghali in the 62nd minute after a brilliant assist from Bakary Bamba.

It was Heartland FC that created the first chance of the game in the second minute after Kelechi Chimezie failed to connect a beautiful cross from Chijioke Akuneto with only goalkeeper, Odah at his mercy. They had another opportunity in the 10th minute after Amaefule elected to feed Akuneto with a cutback pass from a freekick. The midfielder’s shot slit through Rivers United’s defence and slightly touched Nwaodu whose effort won’t have counted as he was flagged offside.

The hosts avalanche of misses continued in the 18th minute when Emeka Atuloma couldn’t bring his head down when the cornerkick from Amaefule fell to him with only the goalkeeper at his mercy. Atulloma who was playing against his former club was found wanting again in the 29th-minute while presented with a similar chance.

The breakthrough came for the home team in the 40th minute from another long throw in of Amaefule. The right-back long thrust troubled the backline of the visitors and were made to make desperate clearance which fell to the path of Akuneto who sidekick a half volley to the top left corner of the post.

The celebration that greeted Heartland’s opener had hardly died down when the Pride of Rivers equalised a minute later after the home team defence was caught in possession and Oghali was on hand to fire the ball past Chijioke Ejiogu from a goalmouth scramble.

It was Rivers United that emerged from the halftime the hungrier and were close to scoring the second goal after the restart when Heartland’s defence switched off. Malachi Ohawume collected the loose ball after the defensive mix-up and raced toward the home team’s goal area with only goalie Ejiogu to beat but his tame shot was easily smothered by the goalkeeper.

Heartland bagged the second goal through Nwaodu whose curling effort beat goalkeeper Odah who dived at full stretch to stop the ball from going in, in the 53rd minute. Odah got injured in the process and had to be replaced five minutes later by Darlington Ovunda.

OghaIi was not yet done with his former employers after he struck again in the 62nd minute to even the scores. The hitman collected the ball from impressive Bakary Bamba who already troubled Heartland’s defence with his pace. He made a dashing run into the Owerri side vital area and fired a pile driver which was too hot for Ejiogu to stop.

Heartland almost regained the lead a minute later but Ogbonna Onuoha’s shot missed the target after he was presenred with a decent chance by Kelechi Chimezie.

It was all Rivers United in the final six minutes of the game with Bamba the tormentor-in-chief. He effortlessly dribbled three Heartland players in one fell swoop and his pass to Nelson Esor only produced a weak shot which Ejiogu easily caught.

There was still a final opportunity for the Pride of Rivers to nick the winning goal in the 94th minute when Fortune Omoniwari raced toward Heartland FC goalmouth before a fantastic last-ditch tackle from Kalu Orji saved the day for the home team.

What does this mean?

Heartland FC have drawn three of their last four games after their three consecutive victories was snapped with a 3-1 loss in Lafia. They have picked only three points from a possible 12 and have slipped up to the 11th spot with 35 points from 25 games.

Rivers United have not fared any better with their recent results. They have drawn their last four matches including consecutive home games. They have remained winless since they defeated Rangers International in Enugu last month. They are in the fifth spot with 42 points from 25 games.

Heartland FC will make a short trip to Uyo for a date with Akwa United while Rivers United will host Kano Pillars who are back to the top of the table.