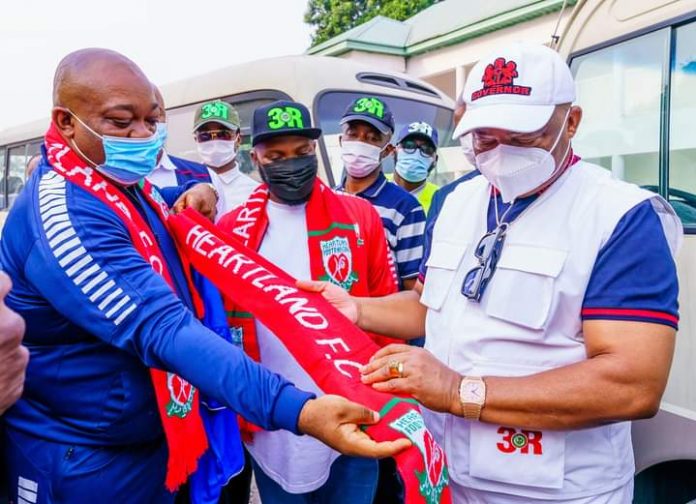 Heartland General Manager Ifeanyi Chukwudi was elated after presenting a muffler and away stripe blue jersey to Governor Uzodinma who was the former President of Nigeria Wresting Federation in 1996.

“I’m very happy with what his Excellency Governor Hope Uzodinma did yesterday (Sunday), he has shown a very good side which Imolites have always praised him for and by doing what most Governors have not remembered to do, I am happy that am the first General Manager to unveil his excellency and the way he wore the muffler immediately I gave him made me so proud once more I am happy and grateful that I am very good citizen of Imo State working for Imo State and also making Imo State proud, Ifeanyi Chukwudi told Heartland Media.

The General Manager also commended the Governor for donating two coaster buses to the Supporters Club and Columbia Fans whose voice has served as the twelve man on and off the pitch, stressing that it will help in navigating the challenges of the club during away matches

“His Excellency surprisingly called us together, to donate brand new buses worth millions of naira to the Supporters Club, the Fans and the other one to the Columbia Fans, this has shown that Heartland has capacity, each match we are going away, we go in group and come back with victory and he(Governor) also promised to fund the maintenance of these things, its a very good one by His Excellency and I am most grateful that it Is happening under my tenure as the general manager of the club.”

Meanwhile Heartland defeated Akwa United 2-1 at the Dan Anyiam Stadium, after the Unveiling / Donation of coaster buses to the Supporters Fans club in what was their second consecutive victory at home on Match Day 6 of NPFL.

Others at the epoch occasion were Hon. Eric Uwakwe Senior Special Assistant to the Governor On Youth Affairs, Heartland Interim Management Committee members, Chief Emma Ochiagha, Chief Anozie among others.