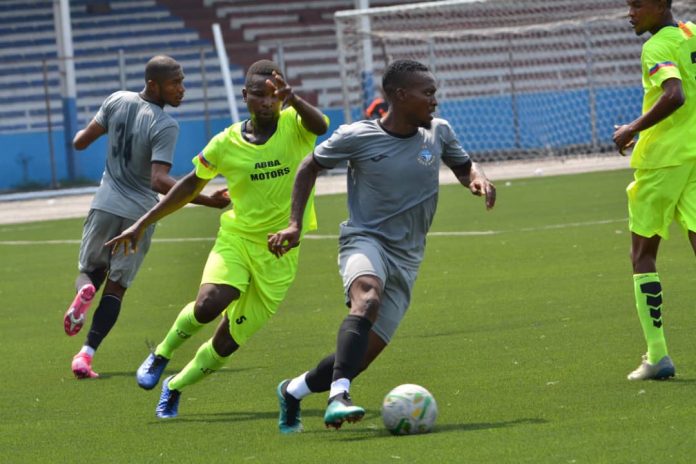 Ngwa United finally left their mark at the ongoing Governor Ikpeazu Pre-season Tournament in Aba after they scooped their first victory of the tournament albeit from a goal down.
Prior to the fixture, discussions centred on two Aba based clubs that were yet to hit their strides at the tournament but at the conclusion of the tie, Ngwa United redeemed their image a little after a 3-1 come back win at the Enyimba International Stadium, Aba over Abia Greater Tomorrow.
Harrison Chinaza drew the first blood for Abia Greater Tomorrow in the fifth minute but Ngwa United restored parity through Michael Josiah in the 36th minute to ensure both teams headed for the halftime break 1-1 apiece.
At the resumption of the second half Ngwa United continued from where they ended the first half and their persistence paid off with two good goals in the 71st and 73rd minutes through Michael Josiah (again) and Ekene Osigwe. The game ended with Ngwa United winning the tie 3-1.
Both teams will play for pride on Thursday. Abia Warriors will tackle Ngwa United while Abia Greater Tomorrow will seek their first win when they face Flight FC also on Thursday.

ENYIMBA 2-1 A&A FC
Enyimba continued their winning run at the Governor Ikpeazu Pre-season Tournament on Wednesday after they pipped A&A FC 2-1 in Aba but they have conceded their first goal after three games.
The People’s Elephant were in cruise control at the start of the game and by the 21st minute they were two goals up through Sadiq Adamu and Cyril Olisema efforts in the 15th and 21st minutes. Olisema’s goal was from the penalty spot.
A&A managed to curtail Enyimba and they had a better second-half which culminated in them reducing the goals arrears through their highest scorer, Emmanuel Israel who scored a fine goal in the 79th minute for his sixth goal of the tournament. The game ended 2-1 in favour of the People’s Elephant.
Despite having a game at hand, Enyimba are through to the semi-final as they currently have nine points from three games. They will play Abia Comets for pride on Thursday. A&A FC on their part completed their fixture quota on Wednesday but they will wait anxiously for the result of Enyimba versus Abia Comets. A win for the People’s Elephant will hand a semi-final ticket to A&A FC but a draw will see Abia Comets pip the Uyo side to the ticket.

Jewel FC crumbled to another loss at the Governor Ikpeazu Pre-season Tournament after a 2-1 defeat to Abia Comets on Wednesday.
Abia Comets through their latest win have exorcised their poor start to A&A FC which they lost 2-0 to nick important wins over Cynosure FC and Jewel FC. The Umuahia side are third in Group A with six points behind A&A FC (six points) and Enyimba (nine points). Abia Comets must get a positive result against Enyimba on Thursday if they are to qualify at the expense of A&A FC.

FLIGHT FC 1-2 PLATEAU UNITED
Plateau United are through to Friday’s semi-final after they secured a 2-1 win over Flight FC. The CAF Champions League campaigner finished their Group B games with 10 points from four games and they are set to end in either first or second position by the time Abia Warriors trade tackles with Ngwa United on Thursday by 10 am.
Abia Warriors are through to the last four as well despite not kicking a ball on Wednesday. They have seven points from three games to occupy the second position before their Group B concluding fixture on Thursday while their nearest rivals, Ngwa United and Flight FC have three points each. Both can only finish with six points each even if they win their last group games on Thursday.