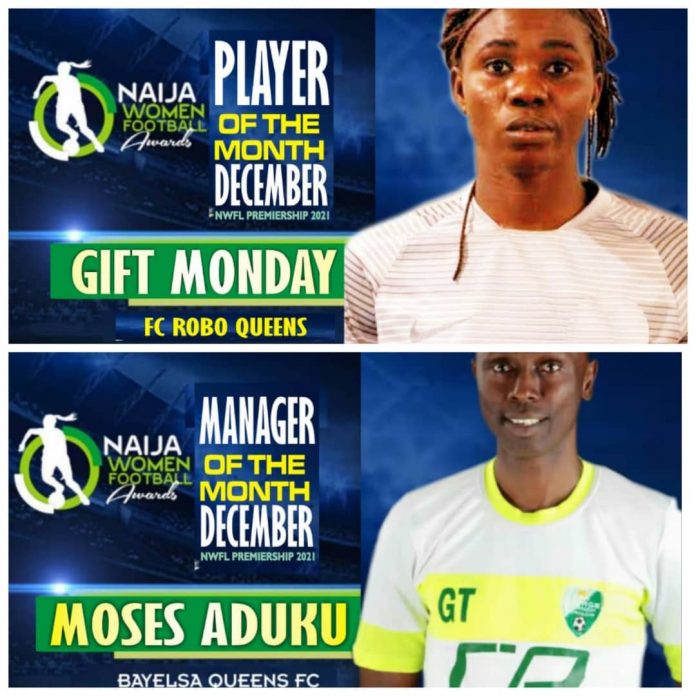 The organisers of the Nigeria Women Football League Awards has announced FC Robo Queens forward Gift Monday as the NWFL Premiership player of the month of December, with Bayelsa Queens boss Moses Aduku also named manager of the month.

Gift Monday scored three goals and made an assist in the month of December, and also helped her side record a rare win in Lafia against Nasarawa Amazons on matchday one.

The Super Falcons forward propelled her side to 4th on the log of the NWFL Premiership after three games, recording two victories, which she played an important role in.

The former C.O.D Ladies of Lagos player beat off competition from Osun Babes forward Yemisi Samuel, Dominance Odubanjo of Delta Queens, Jumoke Alani of Edo Queens, and Abidemi Ibe of Bayelsa Queens to win the monthly award for the first time in her career.

Also, Bayelsa Queens Gaffer, Moses Aduku has been named the NWFL Premiership Manager for the month after guiding his side to three wins from three Premiership games in December.

Victories against Sunshine Queens in Yenagoa, another one against Nasarawa Amazons in Lafia before ending the month with a 1-0 win over FC Robo Queens last week.

The run helped Bayelsa Queens move to the top of the NWFL Premiership, where they remain ahead of every other team, giving him an edge over Rollandson Odeh of Edo Queens who won two and drew one; Yinka Adunola, who won two, but lost one; Osahon Emmanuel who won two and also lost one , and Edwin Okon who recorded a victory and two away draws in December.

It’s the third time he has won the individual award.

The awards will be presented to the duo before the kick-off of week 4 games on Wednesday.