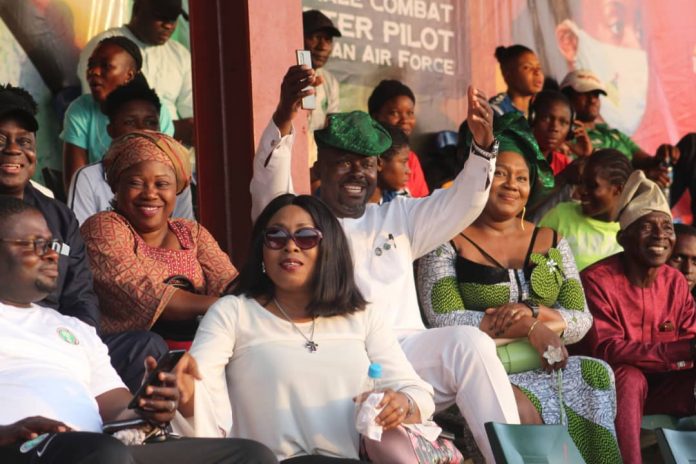 Africa’s biggest women football Pre-season Championship, the “Flying Officers Cup” ended on Sunday, the 22nd of November 2020 with a lot of funfair and glamour.

The Championship which started on Monday the 16th of November at the Guards Brigade Stadium, Abuja had five NWFL Premiership heavyweights and three others competing.

Following the success of the 2019 edition which was held at the Aper Aku Stadium Makurdi, Benue State, the organisers of the competition, Ratels Sports Foundation deemed it fit to primarily rebrand the tournament and rename it the Flying Officers Cup in honour of the late Flying Officer, Tolulope Arotile who lost her life at the age of 24.

Ratels Sports Foundations, was responsible for the accommodation, feeding and general welfare of all the teams during the one week long tournament and also gave all the teams branded jerseys, giant trophy for the winner for keeps, 10 branded ball each for all participating teams, high premium special awards, such as Most Valuable Player(MVP), Best goalkeeper etc which was presented to players who distinguished themselves at the final, high premium medals were also given to teams.

Further more, all the 16 games was streamed live and each of the teams that participated were given N60,000, while each of the coaches also went home with N20,000 each.

In an highly pulsating finals on sunday in Abuja, which was graced by top football administrators such as the Chairperson of the NWFL, Aisha Falode, NFF second Vice-president and LMC Chairperson Mallam Shehu Dikko, the Parents of the late Nigeria first ever female helicopter combat pilot, Tolulope Arotile, Mr and Mrs Akintunde Arotile and lots more has Bayelsa Queens pipped Nasarawa Amazons by a lone goal, scored by Olaiya Barakat in the 16th minute.

Speaking after the event, the founder of Ratels Sports Foundation and President of Naija Ratels Foot all Club, Barrister Paul Edeh thanked everyone that made the competition a success and also stated that the competition was primarily named after the late Tolulope Arotile who lived an exemplary life and thus rose to become the first female helicopter combat pilot, a feat that is priceless and difficult to come by.

He further went to say; ” The tournament is now an annual event and will continue to be named after her, as a a way of immortalizing the young flying officer whose life and time embodies the spirit of sportsmanship which made it possible for her to set the pace for other aspiring women to join the ranks of Flying Officers in the Nigerian Airforce. Edeh said.

Also the Chairperson of the NWFL, Aisha Falode, hailed the organisers for pulling out a perfect competition and want them to continue with the success story.

” This is unprecedented, I am really impressed and hope this will even be better in the coming years. We endorsed this competition because we believe in the ability of Barrister Paul Edeh. His love and passion for the women’s game is great.

Mr Akintunde Arotile, Father of the deceased Flying Officer, who was emotional and also grateful to Ratels Sports Foundation for honouring his daughter, described her as a special, talented and brave child. Mr. Arotile went on to say his daughter was a very religious person, who loved to cater for the welfare of the less privileged girl child.

The next edition of the Flying Officers Cup will be held in Benin City, the capital of Edo state in August 2021.