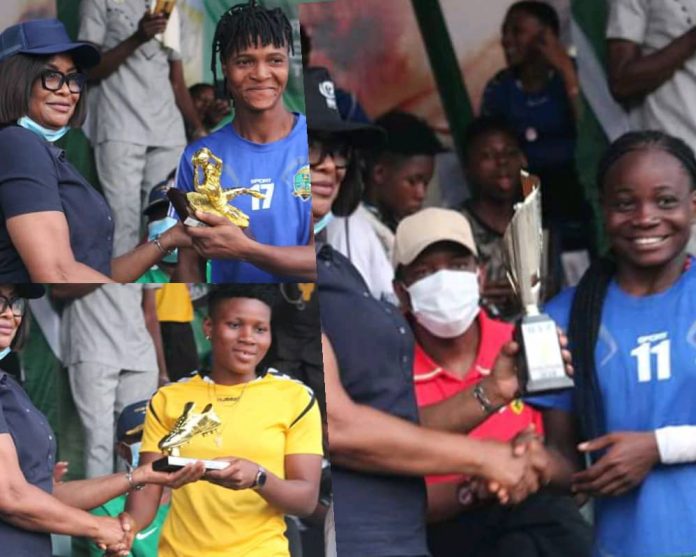 Following Sunday’s conclusion of the 2020 edition of the Flying Officers Cup, staged at the Guards Brigade Stadium, Abuja which had Bayelsa Queens winning the title at the expense of Nasarawa Amazons. The Media team of the tournament takes a cursory look at the players that took part in the second edition and came up with the below recommendations.

Four Bayelsa Queens players, one each from Confluence Queens, Royal Queens and Nasarawa Amazons, while two each representing Naija Ratels and Edo Queens made the official Flying Officers Cup 2020 team of the tournament.

The team was selected by a 5- strong panel of technical study group, led by Oluchi Tobe-chukwu, which also included some top women football journalists. The technical observers made their choices based on various criteria, which had been outlined before the tournament.

Okeke was arguably player of the match in the final against Nasarawa Amazons, capping off a marvelous tournament between the sticks for the ‘Restoration Girls’. It was hard to blame her for any of the goals the champions conceded. The former Edo Queens Goalie brought a calming presence to her team’s backline.

Jumoke was quietly effective at right-back for the Obaseki girls. The former Jokodolu Babes defender showed great energy in getting up and down the flank and also made some timely tackles and interceptions at the back and even scored an important goal against Naija Ratels. Her major contender in this position is Naija Ratels Aishat Animashaun, who was also fantastic all through the competition.

Uzoamaka played with intelligence and maturity that is usually associated with players of her calibre. She did so well from her left full back position and initiated some of Bayelsa Queens goals.

The young forward was terrific and was the engine room of her team, breaking up opposition attacks and starting her team’s own with some fine all round displays. Though her side narrowly lost out on a place in the semi-final, Oliseh was superb even without captain Osas Enoma. She scored two goals from her position, one from a corner kick against Kaduna Queens, the other a fantastic free-kick against Edo Queens.

It does feel right to label Naija Ratels a surprise package, but Ratels certainly exceeded all expectations at the Flying Officers Cup. Ali was solid and resolute at the back and helped her side concede less than any side in the competition.

A top class centre half, Ibe was too strong for most opposing attackers. The former Ibom Angels defender marshalled the Restoration Ladies backline brilliantly, with her reading of the game particularly impressive.

She had a great partnership upfront with jolly friend Grace Obi and was involved in general play, conjuring and contributing to match-winning moments as Bankole Olowookere’s ladies made it to the semi-finals.

Though her side failed to make it past the first round, her influence on the pitch was top-notch and her goals gave her team a good record in the competition.

The Super Falcons midfielder was brilliant in every match she played, helping Edo Queens control possession and demonstrating a useful ability to continually identify and execute the right pass at the right moment.

After a lengthy hiatus from football, because of a career threatening injury, Cheimere Opara scored two important goals for her side, to ensure they got to the final of the Flying Officers Cup. The diminutive forward gave the Christopher Danjuma side a lot of life upfront.

Coach Bros: How Raising Ahmed Musa made me a Millionaire