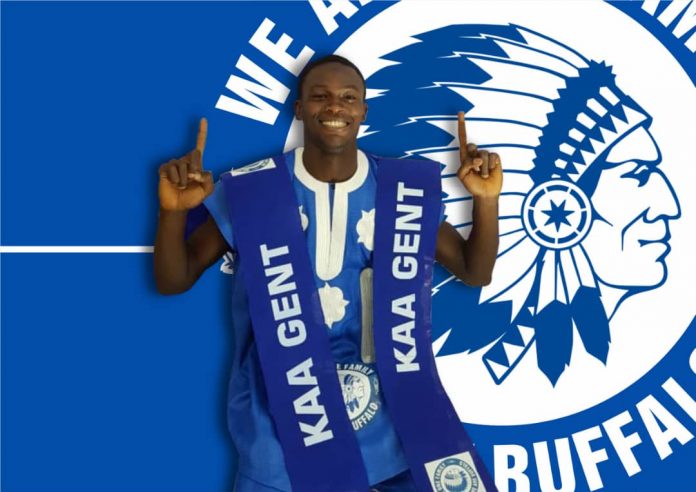 Former Flying Eagles star, Oladoye Adewale has made his debut for KAA Gent in their Jupiler League playoffs tie against Standard Liege which they won 2-0 on Wednesday night in Belgium.

The victory made possible through the goals of Yonas Malede and Roman Yaremchuk in the seventh and 94th minute has brightened Gent’s hope of sealing the ticket to the Europa Conference League which makes its debut in Europe next season.

Adewale’s moment to cherish came on the 90th minute when he was thrust into the game by Gent head coach, Hein Vanhaezebrouck to replace Sven Kums and the Nigerian gave a good account of himself in the over six minutes he tasted action.

The ex- Water FC and Nigeria Under 20 combative midfieder under Ladan Bosso made instant impression when he came on to intercept a pass that led to his team’s second goal of the game.

Www.dasportstainment247.com recalls the duo of Adewale Oladoye and Emeka Chinonso signed from Water FC, Abuja to Gent FC and Adewale has been alloted jersey number 17 while Chinonso is still bidding his time.

Gent have thus moved to the top of the Europa Conference League qualification playoffs by virtue of the win with 35 points to leapfrog KV Mechelen whom they play next on Saturday in the final game. Second placed Mechelen are also with 35 points but have inferior goals difference. Gent will pick the sole ticket with a draw with Standard Liege (fourth with 28 points) versus Oostende (third with 31 points) already considered a dead rubber.

Super Eagles players like Moses Simon, Samuel Kalu, Peter Olayinka and Under 23 star, Rabiu Ibrahim have one time or the other played for Gent FC and are now some of thesought-afterr talents in Europe.