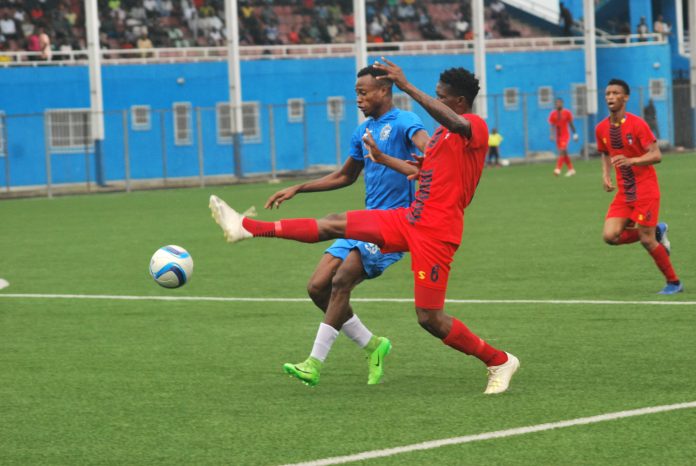 Enyimba have taken a first-leg advantage in the CAF Confederation Cup playoff round following a 2-0 win against South Africa’s TS Galaxy at the Enyimba Stadium, Aba on Sunday evening.

Victor Mbaoma and Martins Usule scored their debut Enyimba goals on a cloudy evening in Aba to put the Nigerian Champions in vantage position for progression to the group phase.

Mbaoma was the first to spark up Sunday’s eventful fixture with a third-minute freekick that rattled the crossbar, before eventually netting the opener, and his first for the club, four minutes later with a simple tap from Bashir Abdulrahman’s low cross.

The hosts were close to a second minutes later but Jean-Marie Guera fired wide from close range after Stanley Dimgba’s initial effort was spilled by Ludwe Mpakumpaku.

Midway through the fixture, the visitors began to impose their possession style but hardly registered a chance until the closing stages of the half when Sizwe Mdlinzo shot over the top from close range before Tshepo Chaine’s header was disallowed for offside.

In a switch to regain stability, Usman Abd’Allah called on Austin Oladapo for Guera shortly after the restart, before Usule replaced Dimgba.

Usule turned to be a menace to the visitors and registered his first Enyimba goal on the hour when he lashed home a heard assist from Mbaoma.

In need for a vital away goal, Galaxy poured out in numbers late on but were often denied by Theophilus Afelokhai’s exceptional goalkeeping.

The People’s Elephant thus take a two-goal cushion into the return fixture to be decided at the Mbombela Stadium in Mbombela, South Africa, in a week’s time. Aggregate winners will advance to the group stage of the competition.