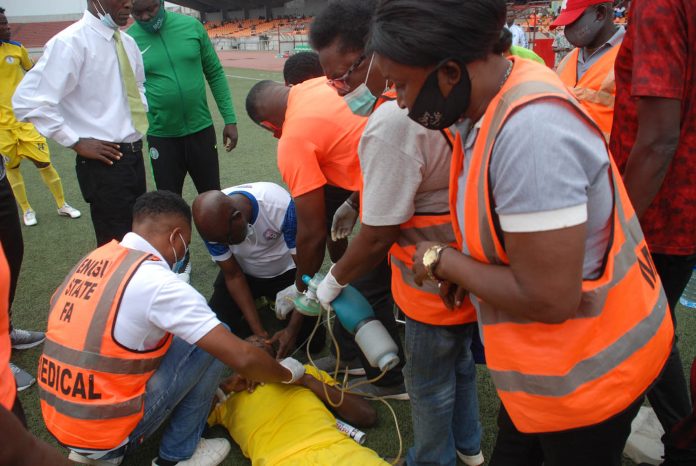 The quick intervention of medical personnel on duty using the medical facilities on ground at the Nnamdi Azikiwe stadium, Enugu venue of the match day 15 fixture between Rangers International F.C and Adamawa United F.C helped greatly in saving the life of Emmanuel Ibekwe, an attacker with the visiting team.

An aerial challenge between the attacker and Rangers’ defender, Uche John on 28 minutes, saw the attacker coming worse off and the alertness of Osas Okoro who saw the attacker’ awkward posture on hitting the ground, raised the alarm that brought the medical personnel onto the pitch while the life-support equipped ambulance was called in.

Medical doctors and nurses from both teams and those from the state F.A quickly went to work at reviving the footballer which was achieved before he was taken to a nearby medical facility for further observations and treatment.

Team manager of the Enugu side, Barr. Amobi Ezeaku, said after the player’s revival, “We thank God for His mercies this afternoon because, we could have had what we saw last season in one of the league venues that led to the loss of a footballer but we were prepared here and we don’t joke with life of any footballer.”

C.E.O designate of the LMC, Prince Davidson Owumi who witnessed the near calamity, said, “When we talk about clubs and F.A to be up to date with their medical facilities, it is for this kind of situations. Thankfully, the home side, Enugu state government, and the F.A were spot on and that is why we were able to contain the situation this afternoon. I thank all the medical personnel that did their best in saving the life of the player.”

Recall that the league lost a player last season when medical assistance did not get to him as he slumped during a match in Lafia.