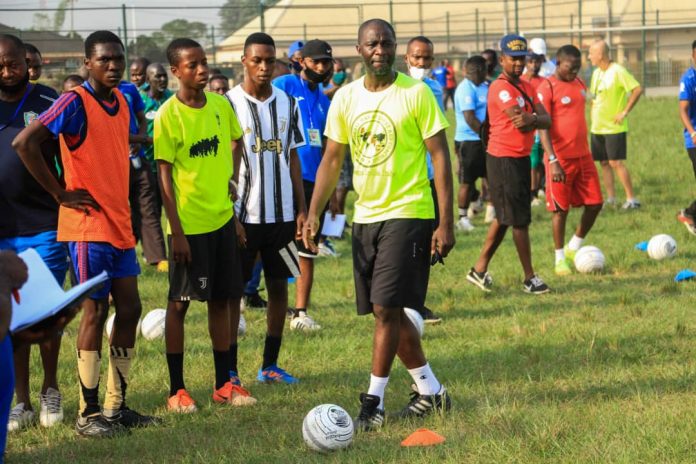 Berackiah/Abigol Football Coaching clinic has recorded another huge success as 74 coaches from South-South and South-East part of the country received their certificate of attendance after a 5-day intensive coaching training.

Speaking at the closing ceremony of the clinic which held at the Delta State Football Secretariat (known as Patrick Okpomo Football House), Harrison Ocholor who represented the State Government at the event lauded the organizers for the initiative which he said would have positive impact on Nigerian football.

The clinic which featured education on all contents of the game offered a rare opportunity for grassroots coaches to learn the art of the game from the revered former Super Eagles Coach and retired FIFA/CAF instructor, High Chief Onigbinde.

It was another edge for the participants of the programme as the former Super Eagles Coach and current Technical Director of the NFF, Coach Austin Eguavoen garnished the delivery with his experience and loads of insightful lectures.

Also availing all the participants from the 11 states of South-East and South-South more knowledge about the dynamics of the game were the Mathew Olorunleke, Roberto Bassi and Marco Gian who came from Italy.

Stressing the importance of coaching education, Monday Odigie the former Bendel Insurance gaffer and a junior CAF instructor urged all the participants not to allow the situation of the country affect their aspirations adding that they should up their game to be in tune with the global best practices.

The train of the clinic landed in Awka, Anambra State where 30 coaches had already begun another round of education on football from all the resource persons.

Lafia, the capital of Nassarawa State will be next on the card to play host to the coaching clinic for the North-Central from Monday 8th- Friday 12th of February.