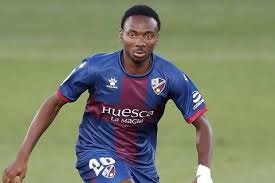 Kelechi Nwakali will have another chance to resurrect his fading SD Huesca future with the appointment of a new coach, Jose Rojo Martin in place of the former helmsman, Michel Sanchez who has not given the Nigerian opportunity to thrive at the modest Spanish La Liga side.

Sanchez under whose guard Huesca staged a return to the La Liga at the beginning of the season was relieved off his duties this week with the club only winning one league game out of 18 plus nine draws and eight defeats.

The final straw that nailed Sanchez’s coffin was their 2-0 home loss to Real Betis on Monday and shortly after then Huesca made the Important decision of asking the coach to leave along with his assistant coaches while Jose Rojo Martin was announced as his replacement the following day.

Nwakali with only five games from 18 games mostly as substitute and a couple of games in the Copa Del Rey before their unceremonious exit to Alcoyano in the Round of 32 last week. He was dressed for the final 26 minutes in the 2-1 loss for his first game since November 20th last year.

Huesca begin life under the new manager next Wednesday in a La Liga away tie against Getafe and Nwakali is expected to warm himself into the heart of Rojo Martin and become an integral member of the team.

Nwakali and his teammates must brace up to reality and start churning important points both home and away if they are to survive the relegation purge at the end of the season. A paltry 12 points from a possible 54 can’t be said to be acceptable anywhere in the world.