An added on-time goal from the captain of ASC Kara of Togo, Richard Nane condemned seven-time Nigeria league champions and CAF Confederation Cup 2019/2020 hopefuls, Rangers International to an avoidable 2-1 defeat in the first leg, playoff round of the second-tier continental competition.

Coach Benedict Ugwu tutored lads were quick off the block inside the 30,000 seaters Stade de Kegue, Lome with the trio of Chiamaka Madu, Nnamdi Egbujuo and Ifeanyi George pulling the strings but were not clinical in front of goal.

With the game approaching the half-hour mark the host who are Togolese League champions pressed forward and some slack defending gifted Sapol Mani an opportunity to squeeze in the opening goal inside the six-yard box on 30 minutes to send the very large crowd of supporters into a frenzy.

Stunned as they were, the ‘Flying Antelopes’ reacted well and went in search for an immediate leveler which came three minutes after conceding as an Ikechukwu Ibenegbu’ defence-splitting pass found Nnamdi Egbujuo inside the box but the attacker was wrestled down and the referee wasted no time in awarding a penalty kick that was expertly dispatched by Ifeanyi George to send the few travelling fans into celebration mood.

However, the host took the game to the visitors in the second half but stout defending by the backline of Rangers ably marshalled by Uche John and Semiu Liadi were spot on with their tackles and clearances while Japhet Opubo did well the few times he was called to duty.

A little loss of concentration by the defenders of Rangers in the second minute of the four-minute added on time, saw Yendoutie Richard Nane drill a hard one into the far post past a sprawling Opubo who could do nothing to stop the back-breaking goal.

Coach Ugwu in a post-match interview said that it was a good match which could have ended on an even note stressing, “It was a very tough game for both sides.

“We did not deserve to lose the match but a loss of concentration in the dying moments of the match by my defenders presented them with the opportunity to score the winning goal. “No doubt, we have what it takes to get the result that will qualify us for the group stage in the return leg. I am very positive.”

Captain of Rangers, Tope Olusesi said, “ASCK are a good side and they passed the ball well but we were able to contain them through most part of the match until that moment of loss of concentration that allowed them to get the win. I believe that we can make it to the group stage after the second leg in Enugu. We can do it.”

Rangers will on Sunday, November 3, 2019 engage the Togolese side in the return leg inside the main bowl of Nnamdi Azikiwe stadium with kickoff fixed for 4.00 pm with the aggregate winner picking a ticket to the group stage of the competition.

In another CAF Confederation cup playoff round match played in Aba, EnyimbaQ defeated South African side, T.S Galaxy 2-0 in the first leg. 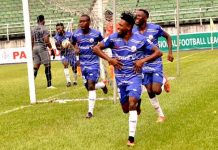