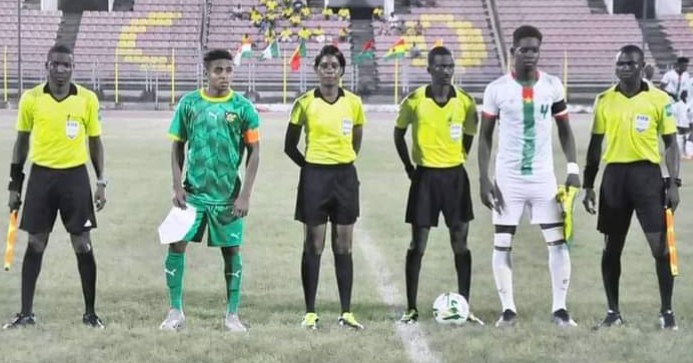 The trio of Nurudeen Abubakar, Hope Igho and Mimisen Iyorhe, have joined to keep the Nigeria flag flying in Cotonou, Benin Republic venue of the ongoing 2020 WAFU UFOA-B U20 Championship.

In a press release from the National Publicity Secretary of the Nigeria Referees Association, Kelechi Mejuobi made available to www.dasportstainment247.com said the match arbiters are taking part as match officials and have officiated games. In the second game involving Togo and Burkina Faso on the first day the soccer fiesta kick started at the Stade Charles de Gaulles, Bauchi state FIFA badged referee, Nurudeen Abubakar was the man at the centre of action as referee while his colleague from the Lagos State Council, Igho Hope handled the flag on the lines as the Assistant Referee 1.

Meanwhile, before her compatriots came on stage, an amazon of the whistle, Mimisen Iyorhe of the Benue Council was in the opening game between Benin and Niger Republic as Assistant Referee 2.

Reacting on the development, President of the Nigeria Referees Association, NRA, Otunba Tade Azeez opined that the association has confidence in the capacity of the appointed referees to deliver when called upon to handle matches.

He therefore wishes them successful outing and journey mercies back home.