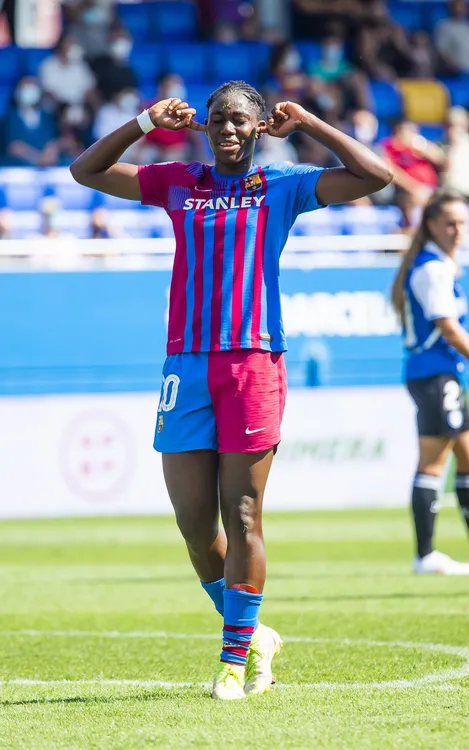 Super Falcons and Barcelona Femeni attacker, Asisat Oshoala returned from almost two months layoff with a goal in her club’s emphatic 7-0 win over Granadilla Tenerife in a Matchday 16 of the Spanish Primera Iberdrola played yesterday.

The Super Falcons’ skipper was medically cleared to resume full training on Friday afternoon and she took just 13 minutes of her introduction to show the football world what had been missed in her absence.

The former FC Robo Queens forward last played for the European Champions on November 10, 2021, during her side’s 4-0 thrashing of Hoffenheim in the UEFA Women’s Champions League group stage match.

Oshoala hobbled off with a knee injury and was replaced by Ana-Maria Crnogorcevic in the 63rd minute of the match and was sidelined for eight matches in all competitions.

She was introduced in the 76th minute as a replacement for Lieke Martens and she scored in the 89th minute to increase her goals tally to 12.

Oshoala has thus moved to joint second in the race for the highest scorer with 12 goals which is the same as the number of goals plundered by 2021 Ballon d’Or winner, Alexia Putellas.

She’s just a goal behind leading scorer and teammate, Lieke Martens who has 13 goals.

Super Falcons coach, Randy Waldrum will be also be relieved as the four-time Africa Women’s Player of The Year will be match fit ahead of Super Falcons’ final qualifying match for the 2022 Africa Women’s Cup of Nations (AWCON) against Côte d’Ivoire, next month.