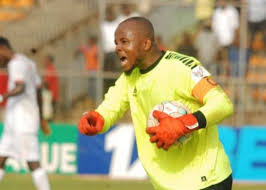 Heartland FC Goalkeeper, Ikechukwu Ezenwa has expressed his regrets for his costly gaffe in their 1-1 home draw with FC IfeanyiUbah on Thursday in a Matchday 8 league tie.

The goalkeeper in a passionate appeal to the Naze Millionaires’ management, players, fans, and the sponsor of the club, said he was hurt by the magnitude of his mistake which cost his team a maximum of three points against the Anambra Warriors and he has begged for a second chance.

Ezenwa misjudged the flight of the freekick awarded to the Anambra Warriors in the 86th minute and he flapped at the effort from Evans Obonda to present Chinemerem Igboeli with the simplest task of nodding the ball into an empty net.

Speaking with Heartland media after the game, the Super Eagles goaltender who was visibly shaken by the number of criticisms that have trailed his last-minute blunder against FC IfeanyiUbah said he felt really bad to have conceded such a goal and was truly sorry about it.

The former Enyimba, Sunshine Stars and Katsina United netminder promised to emerge from the latest error with the conviction to become a better goalkeeper and help Heartland FC through its present difficult situations.

“I sincerely apologise for the game yesterday(Thursday) the 1-1 draw against FC IfeanyiUbah,” Ezenwa told the Heartland media in a report published by www.dasportstainment247.com.

“It was a costly mistake and I know one thing in football we also make mistake to correct our mistakes. I never expected such a blunder from me but like I say that is football and it hurts so much.

“I felt bad. I know it has really affected most of our fans so I want to sincerely apologise to the management of Heartland FC, the technical crew and the players we all are in this together.

“This also goes to my beloved fans, the Columbia fans, I think I have to say I’m so sorry being the leader of the team. I think it has really hurt many people with the performance of yesterday (Thursday) against FC IfeanyiUbah.

Ezenwa who has conceded 11 goals from six league games, is in Heartland’s squad to Lagos where they have a tough league fixture with MFM on Sunday evening where they need a positive result to leave the relegation zone.