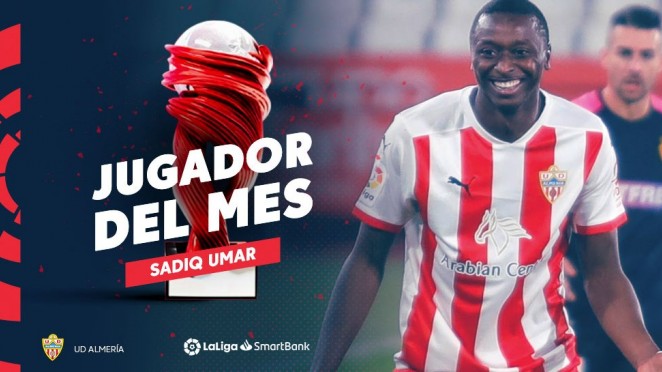 Rave of the moment, Almeria’s Umar Sadiq has been named as the La Liga SmartBank Player for January after an extraordinary month in which he scored five goals in three league games.

The Nigerian was announced yesterday ahead of their away fixture with Fuenlabrada and he was picked ahead of Las Palmas midfielder, Sergio Ruiz and Bernardo Espinosa of Girona.

“Sadiq Umar, UD Almería striker and one of the top scorers in the championship, has been elected the best player in the SmartBank League for the month of January,” the statement on Almeria’s official website said.

“The Rojiblanco footballer was nominated along with UD Las Palmas midfielder,Sergio Ruiz and Girona defender Bernardo Espinosa. Finally the award will be the forward of the Almeria team.

In the recent month of January, Almería has played one less game when the one that closed the first round of the championship was suspended and that should have been played in Leganés.

“In any case, Sadiq has scored five goals in the three confrontations faced by the rojiblancos. He scored three goals against Ponferradina, one against Sabadell, and another against Castellón, in addition to shining with his performances. In fact in this last game he also gave a brilliant assist to Corpas.

“LaLiga plans, in principle, to present the award to Sadiq next Sunday, February 14, in the run-up to the match between Almería and UD Las Palmas at the Estadio de los Juegos Mediterráneos,” the press release concluded.

Sadiq will be presented with his award on Valentine’s day when Almeria face Las Palmas in a league tie.