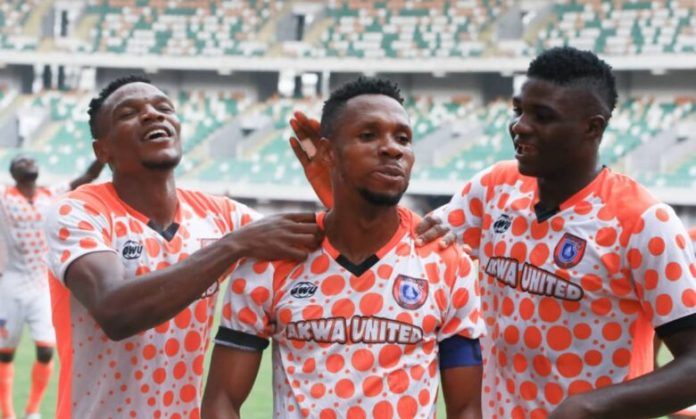 Akwa United have extended their lead at the top of the Nigeria Professional Football League (NPFL) to six points after they defeated Warri Wolves 3-0 to move closer to winning their first league title.

Charles Atshimene netted twice in the eighth and 58th minutes against his former team while Ubong Friday got the third as the Promise Keepers improved their points haul to 64 from 34 games to cement their first position with only four games to season end.

Second and third placed Nasarawa United and Kano Pillars were beaten by Lobi Stars and Enugu Rangers in that order to remain on 58 points from 34 games. They have handed initiatives to Akwa United in the title race.

The Solid Miners led twice in Makurdi through league top marksman, Silas Nwankwo who has now scored 16 goals to race further ahead of his rivals in the race for the highest scorer but the Pride of Benue also had Samuel Matthias in fine form who scored a brace before Austine Ogunye’s 42nd minute effort turned out to be the matchwinner.

Lobi Stars have thus improved to the seventh spot with 53 points from 34 games.

MFM returned to the top 10 after an energy sapping 3-1 home win over faltering Plateau United in Lagos.

Elijah Akanni was at the double in the tie before Tunde Azeez sealed the result with the third goal in the 74th minute. Buhari Ibrahim reduced the goals arrears for the Peace Boys in the 71st minute. The Olukoya Boys are now in the 10th spot with 47 points while Plateau United slid to ninth with the same 47 points with inferior goals difference.

Enugu Rangers kept their hope of continental football alive with a 2-0 win over Kano Pillars. Christian Nnaji and Esor Archibong netted in the fifth and 29th minutes to take the Flying Antelopes to the sixth spot with 55 points. They are three points away from the top three. Nnaji subsequently dedicated his goal to slain Udala FC President, Philip Udala and Team Manager, Godsent Eriobu who were killed by unknown gunmen recently.

Rivers United were beaten 2-1 by Jigawa Golden Stars to further dent their continental football aspirations. Abdullahi Lala scored two goals one in each half in the third and 58th minutes while the Pride of Rivers got a consolation goal through Bakary Bamba in the 45th minute. Rivers United are in the fifth spot with 56 points while Jigawa Golden Stars have slipped out of the relegation zone by the virtue of the win. They have 39 points from as many games to move to the 16th spot.

In Okigwe, Abia Warriors and Heartland FC played an entertaining 90 minutes in an Oriental derby the home team won 2-1.

All the three goals were scored in the first half with Paul Samson scoring first for the Umuahia side in the 16th minute. Skipper, Yakub Hammed increased the tally in the 39th minute but the Naze Millionaires’ Chijioke Akuneto reduced the goals arrear in the 43rd minute off a top assist from Kingsley Maduforo.