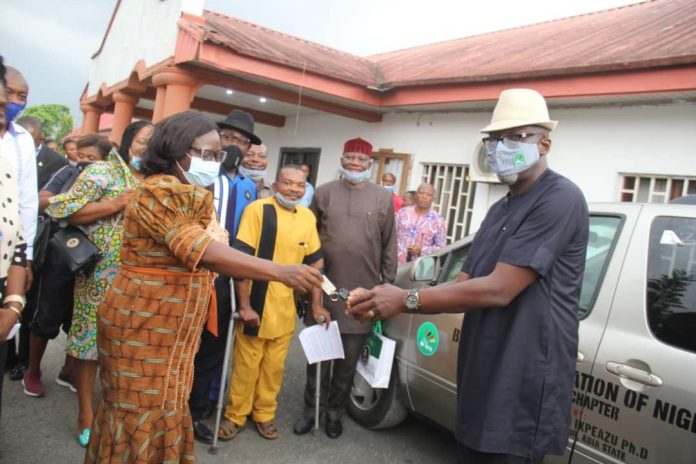 The First Lady of Abia State, Dr. Mrs. Nkechi Ikpeazu has donated a
Toyota Sienna Van for the use of para-badminton players even as she promised to continue to support the game in the country.

The donation was made on Tuesday when the Badminton Federation of Nigeria (BFN) led by its president, Barrister Francis Orbih paid Dr. Ikpeazu a courtesy visit at the Government House, Umuahia.

The First Lady promised to make the Dr. Mrs. Nkechi Ikpeazu National Para Badminton Championship an annual event while assuring that the second edition will come up during the first quarter of next year alongside a Zonal Under-17 Championship.

She promised to lend support to para badminton players who are on the verge of qualification for the Tokyo 2020 Paralympic Games.

Speaking earlier, Orbih stated that the BFN members were in Umuahia to express the board’s gratitude for the immense contribution of the First Lady to the development of para badminton in the country.

“The First Lady’s support has greatly impacted on the team, making it ascend to the enviable position of the number one para badminton playing nation in Africa, while your effort also led to the team’s qualification for the 2019 World Para Badminton Championship in Basel, Switzerland which unfortunately the team could not attend due to visa issues.

“Her Excellency’s support also made it possible for some of the team’s members to be selected by the Badminton World Federation for part sponsorship towards qualification for the Paralympic Games in Tokyo,” Orbih added.

The BFN boss thanked the Abia First Lady for her decision to sponsor the second edition of the Dr. Mrs. Nkechi Ikpeazu National Para Badminton Championship with a view to making it an annual event, while also commending her for the van gift to players.

Orbih expressed belief that the history of Nigeria’s Para badminton would not be complete without the name and the huge contribution of Dr. Ikpeazu.

Board members who accompanied Orbih on the visit were Mrs. Obiageli Solaja, representative of the Southeast zone, Mr. Gabriel Gbayan, representative of the Northcentral zone, Mallam Tunde Kazeem, Mr, Isaac Ogbole, Mr. Samuel Ekeoma, the National Coordinator of Para Badminton and Mr. Chinedu Osuoha, the Secretary-General of the Federation.