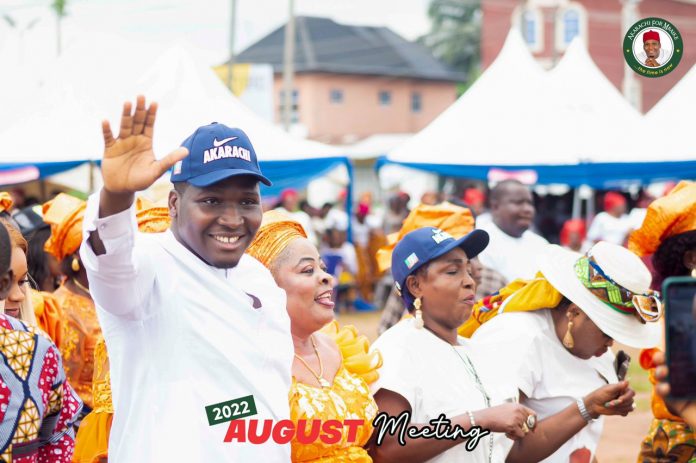 The 2023 House of Representatives candidate of the All Progressives Party (APC) for Mbaitoli/Ikeduru Federal Constituency, Engineer Akarachi Amadi has called for the support of all people of Mbaitoli including women whom he held an elaborate August Meeting for recently.

Engineer Amadi who recently emerged as the candidate of the ruling APC said that he was happy that the Mbaitoli women prayed for him as he requested of them before he embarked on the electoral journey at the primaries and that now that he has picked the party’s ticket for the Mbaike Federal Constituency, he would like the support to continue.

While addressing Mbaitoli women from the 34 autonomous communities who thronged the Mbaitoli LGA headquarters to show solidarity and support, Engineer Amadi reeled out some of what he had done through his foundation to uplift Mbaike including the bankrolling of 25 million naira rated Akarachi Amadi Unity Cup for the youths of Mbaike; procurement of JAMB forms for over 2000 youths in Mbaike and the repair and rehabilitation of some roads within the two Local Government Areas.

Others include multi million naira youth and women empowerment programmes, rehabilitation of roads, renovation of primary and secondary schools, donation of brand new transformers to some rural communities, primary, secondary and University scholarship to most indigent members of the council areas, payment of hospital bills to many indigent persons, building and furnishing of houses to indigent widows just to mention but a few.

The youthful politician pointed out that his mission in politics is to uplift the welfare of the populace, repositioned Mbaike and Imo State for greater glory and to ensure that Nigeria as a nation will embrace the essence of visionary leadership through quality and effective representation, good and purposeful governance.

Engineer Amadi said: “The 25 million naira worth Akarachi Cup has yielded results. We have 27 youths who are playing for different football clubs in Nigeria and abroad.

“I went round with the assurances that Mbaike must have more Engineers, Lawyers, Doctors, Architects and so on and we have started to fulfill that promise. We have over 2000 people that sat for free JAMB exams.

“The highest person from JAMB in Imo state is from Mbaike courtesy of the JAMB exams sponsorship. The lady scored 350 over 400. The lady has been given scholarship throughout her stay in the University courtesy of Akarachi Foundation. About 30 sons and daughters of Mbaike that have also received scholarship after passing their JAMB exams and scoring above 200 marks.

“We have completed 1.8 km in Ikeduru and by the special grace of God his Excellency, Hope Uzodinma will be at Nchicha Ngugo to commission the road with a bridge.

“We have also commenced the construction of the Mbieri road linking Nkworji to Obazu Mbieri and Orie Mbieri. The contractor has been mobilised again and he will come and resume work on the road.”

Amadi expressed happiness to Mbaitoli women for being ambassadors of good motherhood despite their challenges and active participation in politics while reassuring them of his commitment in carrying them along in all his political endeavors.

He further extended gratitude to Imo State government under the leadership of Senator Hope Uzodinma for being women friendly as he reiterated the needs for the populace to be cooperative and supportive of the Shared Prosperity and 3 R mantra administration.

The House of Representatives candidate also commended Mbaitoli women for organizing the August meeting as well as their comportment throughout the programme.

In appreciation he doled out N200,000 for each of the 34 autonomous communities that constituted the Local Government Area and were equally in attendance, culminating into 6.8m Naira. As if that was not enough, he gave 100 quality wrappers to the women group of the 34 autonomous Communities, totally 3,400 wrappers for Mbaitoli women.

“All I ask for is your support. No good son will forget his mother. I can never forget you,” Akarachi added.

Responding, Ugoeze Christiana Dike who is the Public Relations Officer of the Ugoezes who stood in for the Ugoezes Chairperson described the politician as a rare breed recalling the lots he has done to the various communities as a private business man noting if given government mandate that the people will certainly rejoice.

Dike reiterated that it’s the resolve of Mbaitoli women to give him maximum support in all his political endeavors.

“We are begging the youths to rally round one of them. Akarachi provides a bright future for the youths. August meeting is worth and for the fact he remembered the women. They have been lacking and today the women went home with joy,” Ugoeze Christiana Dike said.

“We are begging God to grant him his heart desire and emerge successful at the next elections.”

Similarly, Lolo Latricia Nwosu, the chairperson of women from Eziama Obiato described youthful Amadi as philanthropist par excellence and said Mbaitoli women have been convinced of his commitments to effective and qualitative representation of the federal constituency if given the mandate.

Nwosu advised women of the federal constituency to always remember the politician while reiterating the love Mbaitolu women have for the ambitious Federal lawmaker.

Lady Isabela Asinobi, APC Women Leader, Mbaitoli LGA also extolled the virtues of Engineer Akarachi Amadi highlighting what his election into the Green Chambers would mean for Mbaike with what he has done so far in the area of human and capital development.

She said Engineer Amadi is a breath of fresh air to the political space in Mbaike and that everything must be done to support his candidacy as a way of appreciating is noble controlbutions.

“It is an amazing occasion and we are all happy to have Engineer Akarachi Amadi in our midst. I don’t think we have had such thing before from a candidate in the past. It is a wonderful innovation,” the APC Women Leader in Mbaitoli LGA said.

“The party has done this severally but it is first time a candidate will extend this to the autonomous communities. It was meant for all the women in the communities to come out and have a feel of August gathering in August.

“Akarachi is a goal is our language. He is a wonderful person and he has brought a lot to the table. We pray that God grants him electoral success at the polls and his wish to get the Green Chambers is realised. He is really supporting the women.”

This year, well attended annual August meeting of women of Mbaitoli Council area of Imo State turned into political carnival as Hon. Akarachi Amadi, the 2023 Mbaitoli/Ikeduru House of Representatives candidate of All Progressives Congress, APC stormed Nwaorieubi, the venue of the well attended meeting and the headquarter’s of the Local government area with his intimidating entourage, ardent supporters and fans.

Youthful Akarachi attended the historical August meeting with his pretty wife and parents, Chief and Lolo Amadi (Shavon) was overwhelmed with joy over the reception as he waved hands as a mark of an appreciative response.

Others that attended the occasion were the Sole Administrator of Mbaitoli LGA, Chinasa Hamilton Opara and other prominent sons and daughters of Mbaitoli and Ikeduru LGA.