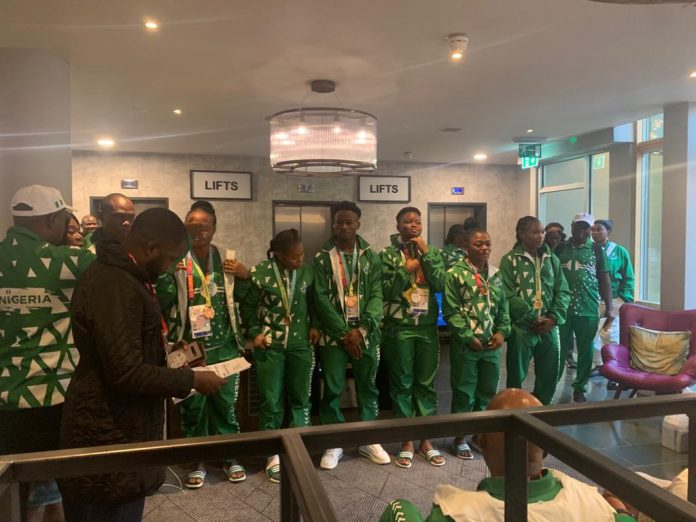 The Ministry of Youth and Sports Development in another show of proactiveness splashed $25,000 on Team Nigeria athletes who have so far won medals at the ongoing Commonwealth Games in Birmingham.

In a friendly ceremony held at the Hilton Garden in Birmingham, the athletes and their coaches were rewarded for bringing glory to fatherland

Gold medal winners, Adijat Adenike Olarinoye and Rafiatu Folashade Lawal, received $5,000 each, while their coaches were also given $3,000 each.

Taiwo Liadi, a silver medalist in the women’s 76kg Weightlifting event, received $3,000 for her effort.

For bronze medal winners, Edidiong Joseph Umaofia, Islamiyat Yusuf and Mary Osijo, they all got $2,000 each for their effort.

The event had in attendance, Chief of Staff to the Minster of Youth and Sports Development, Alh. Abba Yola, Director of finance at the ministry Olufehinti Olusegun and Dr Simon Ebhojiaye who is the leader of delegation for team Nigeria to the games.

Gold medalist in the 59kg Women’s Weightlifting event, Folashade Lawal said “I am pleased we got rewarded even before the end of the competition, I thank the honourable Minister for Sports, Sunday Dare for his proactiveness in this regard”.

“It is quite timely for us, as this act will encourage and spur all athletes to do more. For me, I want to thank the Minster for this and I’m very excited” she said.

As more medals and records continue to pour in for Nigeria at the games, the Sports minister has again reiterate the fact that athletes’ welfare remains a top priority in his administration.