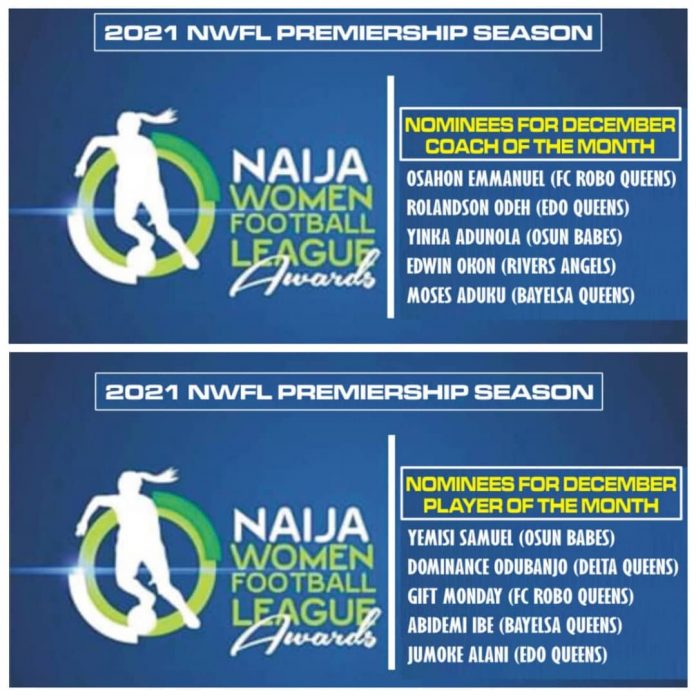 Gift Monday produced a stunning month for the ‘Lagos Landladies’ as she scored the first hat-trick of the season and also was crucial to her team’s 1-0 away win to Nasarawa Amazons.

Another nominee for the award is Osun Babes forward Yemisi Samuel who scored a brace in her team’s 3-0 win over Pelican Stars in Osogbo, the former Sunshine Queens player also scored her team’s lone goal in Uyo against Ibom Angels in week one.

Delta Queens striker Dominance Odubanjo is another favourite to land the player of the month award. The former Taraba Queens forward also scored a brace against Dreamstar Ladies in Agbor, with another beautiful display and a goal against Rivers Angels in week 2.

Other nominees are Bayelsa Queens defender Abidemi Ibe who was a rock at the back of the ‘Restoration Ladies’ defence and was also instrumental to her side recording three Victories in three matches in tecember.

Edo Queens defender Jumoke Alani sums up the five nominees for the player of the month award. The young defender was consistent in the ‘Obaseki Girls’ three games, winning two and drawing one against Rivers Angels.

Five managers were nominated for the NWFL Premiership manager of the month award for December.

Nominees are Osun Babes’ Yinka Adunola who got off with two wins out of three, including a victory in Uyo against Ibom Angels and a big win at home against Pelican Stars in week three. Another favourite is Edo Queens’ Rollandson Odeh who recorded two wins and a draw in three matches.

Others are Bayelsa Queens’ Moses Aduku, who propelled his team to winning three games out of three in the month of December. RiversAngels’ Edwin Okon for drawing two difficult away games and winning hugely against Delta Queens, Osahon Emmanuel for guiding his side, FC Robo Queens to a 1-0 victory against Nasarawa Amazons in Lafia and a big win against Osun Babes in Lagos.

The winners will be announced on Monday.