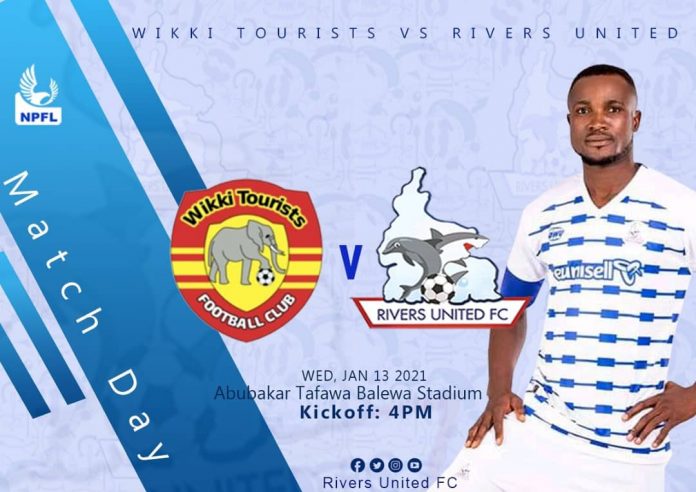 If nothing else, Technical Adviser Stanley Eguma has certainly made Rivers United supporters believe in their club again after their decent performances in both Nigeria Professional Football League and the CAF Confederation Cup.

The “Pride of Rivers” have carried their momentum from the end of last season into 2020-21, which has begun with victories over Futuro Kings in the CAF Confederation Cup preliminary round, Bloemfontein Celtic in South Africa and victories over Rangers, Abia Warriors and Kwara United in the NPFL.

It is now five wins in their last six competitive outings for Eguma’s men, and they will be looking to keep the feel-good factor alive.

This is a fixture Rivers United will seek to do better in, too, having been defeated by Wikki Tourist in 7 of their last encounters in all competitions with Rivers United winning 5 and 4 ending in a draw

Wikki Tourist played out a goalless draw at home against Plateau United on NPFL Matchday 2 after falling 1-2 to Nasarawa United on Matchday 1, but that has done little to win over worried supporters.

Tourist only ever seem to be a couple of bad results away from all-out anarchy, so Abd’Allah will know the importance of quickly steadying the ship.

Good news for Rivers United supporters as new imports Israel Emmanuel and Solomon Ogberahwe made the trip to Bauchi.

Rivers United remain without defenders Kazie Enyinnaya, Ifeanyi Anaemena and Bamba Bakari for this away game, leaving Eguma with limited options at the back.

Nelson Esor makes a return after serving out his one match suspension.

Fortune Omoniwari may be rested for this match, possibly opening the door for Israel Emmanuel to come in alongside Stephen Gopey.

Given their display at the Adokiye Amiesimaka Stadium on Wednesday and the fact they have had a weekend tie against Abia Warriors, enforced changes are likely this midweek, so the same front three can be unexpected.

As for the host, Stanley Nwabali will seek to add to his clean sheet at home and will start on Wednesday.

Promise Damala is Tourist only goal scorer so far, giving Usman Abd’allah a decision to make up top.

What the Coaches are saying:

Eguma: “Our target is to win the league but for now it’s not yet on our side. It is not yet time for us to determine. The league is still young so we will be taking games, game after game and then until we get to a stage when we will say yes, we are winning the league.”

“We are not going to be boastful because we know it’s the game of football but we will try our best to ensure that we maintain our winning streak.”