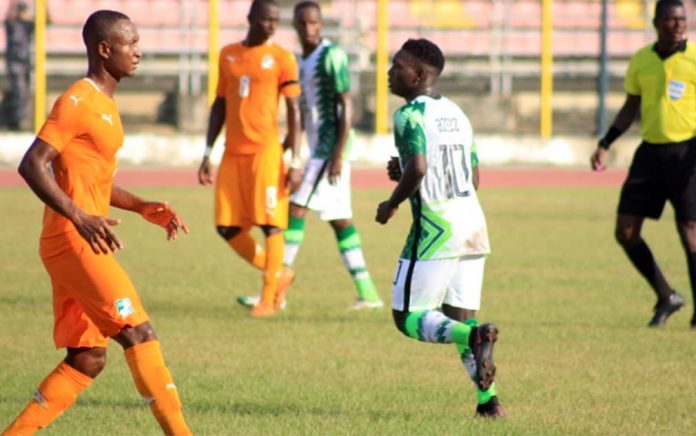 Nigeria’s U20 Boys, Flying Eagles will seek a place in the semi finals of the ongoing WAFU B U20 Tournament in Porto Novo on Wednesday when they confront West African arch rivals, Ghana’s Black Satellites at the Stade Charles de Gaulles.

With only three teams in Group B and having drawn their first tie against Cote d’Ivoire on Sunday, the seven-time African champions require a win to avoid any unforeseen circumstances to advance to the knock-out rounds.

Chris Nwaeze had given the Flying Eagles the lead in the 61st minute against the Ivorians but then got sent off for a second bookable offence as Nigeria conceded a late equalizer to drop two points. Nwaeze will play no part in Wednesday’s encounter.

Head Coach Ladan Bosso is upbeat about the chances of his wards, saying the lessons learnt from the opening clash would be put to good use against the illustrious opponents. “I thought we did enough to pick up the three points against the Ivorians but we lost concentration towards the tail end of the game and were punished for it.

“We controlled the game for most parts and should have won but the red card destabilised my boys and put us out of sync tactically. The clash with Ghana will be tough but we are ready. The boys understand what is at stake and I have confidence they will do the nation proud. Our target here remains the same: winning the tournament and qualifying for the CAF U20 Cup of Nations in Mauritania.”

Mike Zaruma, who captained the team against the Ivorians, echoed Coach Bosso’s optimism. “Taking only one point from the tie with the Ivorians was a tough one because we played better and created more chances to win the game. We felt disappointed but that is behind us now and Ghana is the focus. We know that we must win to enhance our chances of reaching the knockout stage.

“I believe in what we can do as a team. We are ready to pick the three points against Ghana in order to make Nigerians happy.”