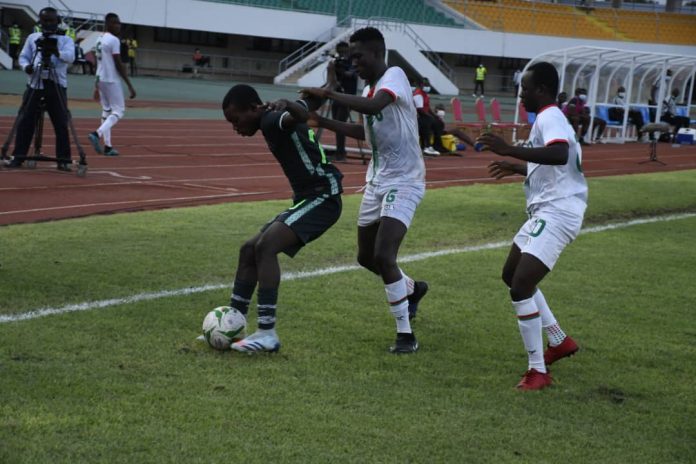 Golden Eaglets skipper, Chukwuemeka Egbu has stressed that the Nigeria’s cadet team will pull all their energies to good use as they strive to exert their revenge on the Junior Elephants of Cote ‘d’ Ivoire who beat them in the group stage of the WAFU-B Under 17 Championship In Togo when both teams lockhorns in the grand finale on Monday night.

The Eaglets started the cadet competition on a shaky note losing to the Ivoriens 1-0 but they rallied back to pick a point against the Black Starlets of Ghana. Nigeria’s qualification for the semi-final was assured when Cote ‘d’ Ivoire thrashed Ghana 3-1 in the deciding group game.

Speaking ahead of the final clash, Egbu noted that defending the tournament they won two years ago was the zeal that is propelling them to go all the way to win the tournament irrespective of the odd they face.

“So far so good, we thank God for having see us through, to be one of the teams in the final after all hope was lost,” Egbu told the Golden Eaglets Media.

“Looking at tomorrow game ( final), it’s not going to be easy, we are playing against a team we lost to in the opening group match.

“I believe we are going to put in everything from the blast of the whistle, we will attack and defend because this is a great opportunity which Nigerians are expecting us to secure victory.

“We have to defend trophy and make it back to back win for Nigeria. By the Grace of God we shall bring the trophy back to Nigeria,” he said.

Baby Elephants of Cote d’Ivoire have won all their three matches on the road to the final. They opened the competition with a win over the Golden Eaglets in the group B opener and defeated Ghana 3-1 to emerge group winners. Cote d’Ivoire U17 team beat Niger Republic in the semifinals to book a final showdown with Nigeria tomorrow.

The final match against Coted’ivoire is slated for Monday, 8pm Nigeria time.

NWFL Premiership Super 6: Bayelsa Queens close in on title as...