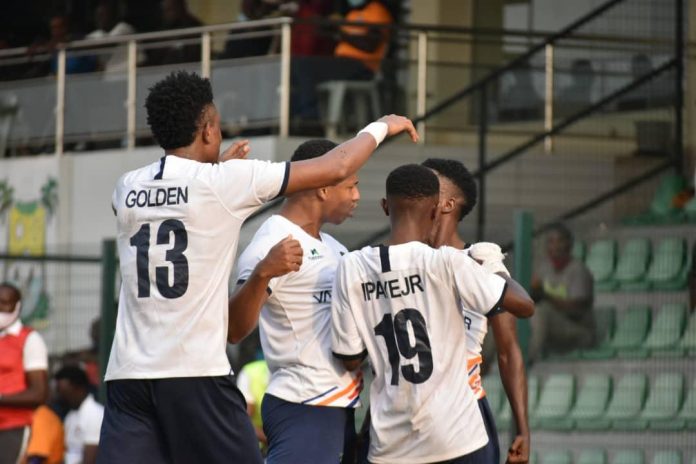 Days after holding NPFL side MFM FC to a goalless draw, Vandrezzer FC returned to winning ways with a one nil over Remo Stars at the Soccer Temple, Agege on Friday.

Damilare Babatunde’s 78th-minute strike was the difference in the entertaining encounter as Rafael Everton’s men secured the hard-fought victory.

The first-half was about the goalkeeping brilliance of Edwin Nwakamma, as the former Abia Warriors player pulled off some great saves.

Apart from Edwin’s heroics, we also had our moments, with Michael Ipaye (playing his first trial game for the Lions) shooting wide, Udom Ekerette going close with a glancing header, while another trial player, Golden UdoInyang should have done better when he was through on goal.

Remo Stars had a foothold on the game after the break until Michael Nelson won a freekick on the edge of the opposition box.

Goalkeeper Bankole misjudged the flight of Ivo Junior’s freekick and substitute Damilare Babatunde took advantage to score with the simplest of finishes.

There was a late scare for us as Remo Stars kept pushing for the equalizer, but our goalkeeper put his body in the way of multiple shots to ensure the victory.

The result will definitely lift our camp as we kept our second-consecutive clean sheet and beat one of the top teams in the NNL.

The game was the third in the series of friendlies for VFC since arriving Lagos last weekend – a win 2-1 over Team Lagos last Sunday, a goalless draw versus MFM FC on Wednesday and Friday’s 1-0 win over Remo Stars.

As usual, the tie was broadcast LIVE on VFC TV via the Vandrezzer FC app.

The Lions now await their first game in the 2020/21 NNL season, which will likely be next mid-week.

Star of the Day: Goalkeeper Edwin Nwakamma made 6 superb saves, passed the ball well from the back and made several interceptions to keep us in the game.