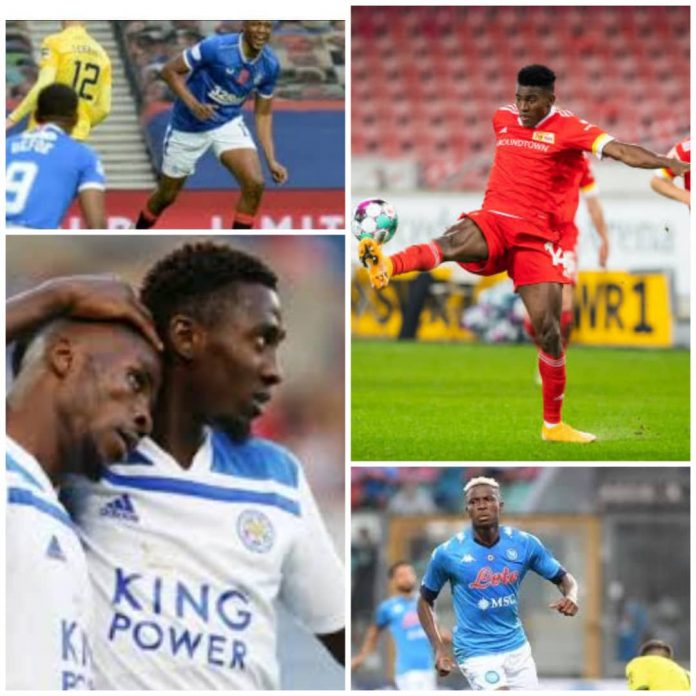 Football matches have truly returned after the short yuletide break of some leagues in Europe. Nigerian players will expectedly strive to make their clubs happy as they chase important points this weekend and www.dasportstainment247.com culled the piece from The Nation Newspaper as written by TUNDE LIADI with some minor adjustments to refresh it.

Here are the reviews of some of the games involving Nigerian players.

In the SPANISH LA LIGA, Villarreal ended the year with a 2-0 loss to Sevilla with Samuel Chukwueze playing the final 27 minutes. He is expected to start from the bench again when the Yellow Submarines face Levante today in another league tie.

Ramon Azeez continues to be eased into action gradually at Granada after his recent return from injury. He has been on the bench in his team’s recent games. The game at Eibar tomorrow could present the Super Eagles’ midfielder an opportunity to taste league action again for the first time since October as they seek a second straight win after the 2-1 triumph over Valencia midweek.

Former Junior International, Kelechi Nwakali continues to be linked with a move away from SD Huesca and his bench-warming role at the Spanish La Liga side has done little to quell the rumour. The 22-year-old has not played for Huesca in the league since November 20th, 2020 against Osasuna. Will he get his chance when Huesca trade tackles with Barcelona tomorrow?

In the ENGLISH PREMIER LEAGUE, after the joy of scoring and earning a draw at Anfield against Liverpool, Semi Ajayi and West Brom were given reality check by Leeds United who ran them ragged 5-0 at the Hawthorns midweek. It was an almost similar result versus Aston Villa (3-0) a few days after they picked a valuable draw against Man City at the Etihad Stadium. Can new coach, Sam Allardyce rally them to a home win against resurgence Arsenal today?

Wilfred Ndidi was rested in the midweek away draw at Crystal Palace in a game his compatriot and teammate, Kelechi Iheanacho missed a penalty kick for Leicester City. Ndidi lasted the entire duration of the game in the last weekend’s home draw with Odion Ighalo– less Manchester United but Iheanacho was rooted to the bench in the same game. The Foxes will hope to halt their recent winless streak against Newcastle United at the St. James’ Park tonight.

It is unclear if the Burney versus Fulham tie will go ahead on Monday at Turf Moor with the Cottagers away trip to Tottenham postponed indefinitely due to Covid-19 positive results in camp of the former. Ola Aina and his two other teammates with Nigerian roots: Ademola Lookman and Tosin Adarabioyo are on the books of Fulham and were awesome in their goalless home draw with Southampton last weekend.

After Coronavirus concerns forced Alex Iwobi‘s Everton versus Manchester City tie to be shifted, the Toffees lost 1-0 at home to West Ham yesterday to hand club’s ex-Manager, David Moyes his first win at Goodison Park since he left in 2013 while Manchester United without Ighalo beat hard-fighting Aston Villa 2-1 also in a New Year tie at the Old Trafford.

Matches return to the GERMAN BUNDESLIGA from the yuletide break today with Toluwase Arokodare and Kingsley Ehizibue’s FC Cologne scheduled to face Augsburg. Though without the Nigerian duo, the Goats ended 2020 with a morale boosting goalless draw at RB Liepzig, they will be eyeing a win to steer them further away from the relegation zone in the opening fixture of the year.

Kevin Akpoguma played the final 11 minutes of Hoffenheim’s impressive 2-1 away win at Borussia Monchegladbach in the last round of fixtures before the break. He is expected to play a more active role when his club host Freiburg today. Hoffenheim have been erratic this campaign and their 12th spot on the table with 15 points from 13 games showed how inconsistent they have been.

Taiwo Awoniyi ended the year on a good note with a goal and 86 minutes appearance against Borussia Dortmund. He netted his fourth goal of the season as Union Berlin hovered over Dortmund 2-1. They have another game with Werder Bremen today as they chase down European football ticket at the end of the season. They are currently sixth on the log with 21 points from 13 games.

In SCOTLAND, the 422nd Old Firm Derby tie will be in the offing today at Lunch Time with Rangers hosting Celtic at the Ibrox Park in a game that could potentially put the league title beyond the grasp of nine times successive Champions, Celtic. Rangers won the initial leg 2-0 in October (their 163rd win in ties between both teams) and with 16 points gap difference separating both teams (Although Celtic have three outstanding games) after 21 games, anything other than a victory for the visitors could mean relinquishing the crown to the Gers for the first time since 2011-12 season. Celtic have won the title for nine uninterrupted seasons.

Nigerian duo of Leon Balogun and Joe Aribo have played major roles in the near domination of Rangers in Scotland this season after the last two unsuccessful seasons under Steven Gerrard. They were present when the Gers recorded their 12th and 13th straight wins against Hibernian and St. Mirren last weekend and midweek. Can they make it 14 on the trot?

The ITALIAN SERIE A stages a comeback tomorrow from the yuletide break with three Nigerians expected to adorn their club jerseys tomorrow in important Matchday 15 games.

Simy Nwankwo’s Crotone have experienced a turnaround in the last three games in which they have gone unbeaten. They are guests of second-placed Inter Milan at the San Siro tomorrow. Can they extend their unbeaten streak to four games?

The positive news of the recovery of Super Eagles Striker, Victor Osimhen from a shoulder injury had been cut short by the news of him contracting Covid-19 from his travel abroad for the yuletide break. His expected return to league action tomorrow at Cagliari has now been put on hold. In the absence of the former Lille attacker, the Pertonopei have dropped to the fifth position with 25 points. He is also expected to miss Spezia’s visit to the San Siro on Wednesday while his speedy recovery from the virus could determine his chances of a comeback against Udinese on January 10th, 2021.

Ex- Under 23 star, Kingsley Michael is still on the fringes of Bologna. He should make the bench as they travel to face Fiorentina tomorrow.