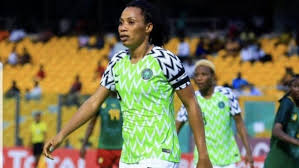 Minsk of Belarus defender, Onome Ebi has swelled the number of players in the camp of the Super Falcons to 25 after she linked up with the rest of the squad on Saturday night, www.dasportstainment247.com can reveal.

She is among the remaining two players Falcons head coach, Randy Waldrum stated may arrive before the tie with Portugal billed for Sunday and her arrival is a timely boost to the defence of the team which was uncoordinated in the first game they lost to the Reggae Girlz of Jamaica last week.

Celine Ottah had earlier joined the Nigeria women’s national team in Houston on Friday afternoon as the Super Falcons camp continues to swell ahead of Sunday’s clash with Portugal, SavidNews can confirm.

Ottah, who was among the 10 Nigerian Women’s Football League Premiership players named in the initial 25-woman roaster, landed in the United States from Lagos, having overcome visa and travel hitches.

In both players’ absence, Houston Dash forward Deneisha Blackwood scored the only goal at the BBVA Stadium in the 54th minute to end the African champions’ unbeaten run of eight games on Thursday.

Their arrival, however, increased the number of players at the team’s base of Marriott Marquis Hotel to 25 as they gear up for their second game of the 10-day Summer Series in Texas, which kicked off on Thursday.

Meanwhile, Barcelona star Asisat Oshoala is also being expected to arrive at the camp before the showdown with the Portuguese, SavidNews reliably gathered.

The Super Falcons skipper, who was also a victim of visa hitches, finally left her base – Spain on Saturday morning and she’s expected to link up against the Europeans.

Following a losing start to Jamaica, coach Randy Waldrum will be counting on the availability of Oshoala and Ebi to make a huge difference when they take on Francisco Neto’s side at the same venue.