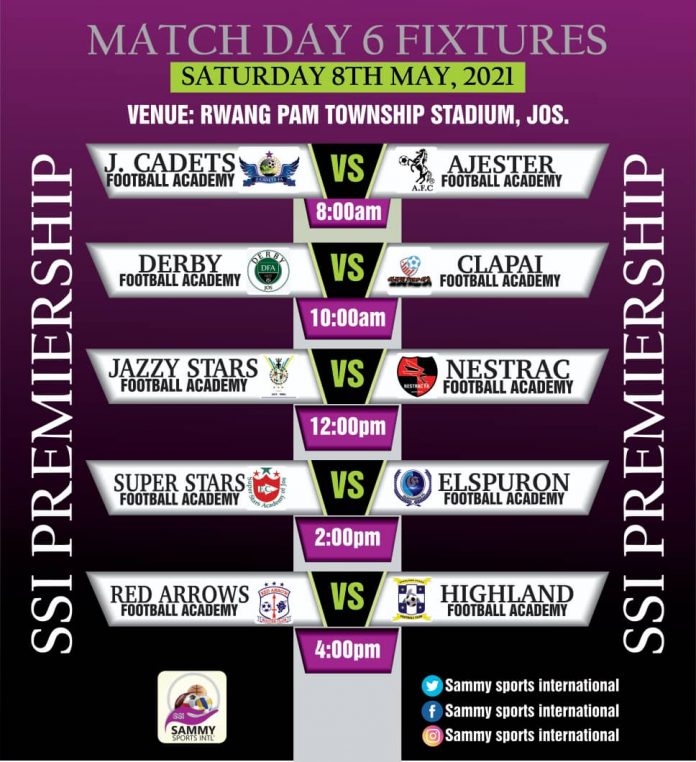 A wounded Ajester FA will be at away to a Cadets FA side yet to taste victory in 3 consecutive matches. Ajester on their own part surprisingly lost to Super Star FA in Match Day 5. Ajester FA needs this win badly to put the trio of Jazzy Stars, Derby FA and El-Spuron on their toes.

Derby FA, with the best defence thus far, having conceded only 3 goals in 5 matches should have a smooth ride over bottom placed Clapai FA. But Derby FA, who will be missing their midfield general and inspirational captain,Musa Dino, due to red card, might underrate Clapai FA at their own peril!
Clapai FA are d only team yet to concede in 2nd half.

Jazzy Stars FA are into the match of their lives today as Nestrac FA have sworn to dent and bring to an end Jazzy Stars unbeaten record and hence, move up the log where they were occupying before their poor runs of matches.

Another encounter to watchout for is the 4th match between a resurgent Super Stars FA who defeated highly rated and erstwhile 2nd placed team, Ajester FA in match Day 5 and a third placed Elspuron FA side giving the duo of Jazzy Stars FA and Derby FA a run for their money.

The last match of the day will be a very interesting one as a winless Red Arrow FA side can summon some courage and confidence from their Teqball friendly victory over Highland Stars FA in both the singles and doubles as they confront themselves on the football pitch!
Highland Stars FA are placed 4th on the league table and have tasted defeat just once in 5 matches, while their host, Red Arrows are yet to get a single point in 5 matches.

Ajester FA and Jazzy Stars FA have the best attack in the six weeks old league after netting 13 goals each. Will both be allowed to increase their goals haul?
90minutes will tell.

Derby FA have the best and the most discipline defence in the whole league after conceding only 3 goals in a league full of goals with midfielders and attackers firing from all cylinders. But can they stop a very hungry Clapai FA from scoring?
Only 90 minutes will tell.