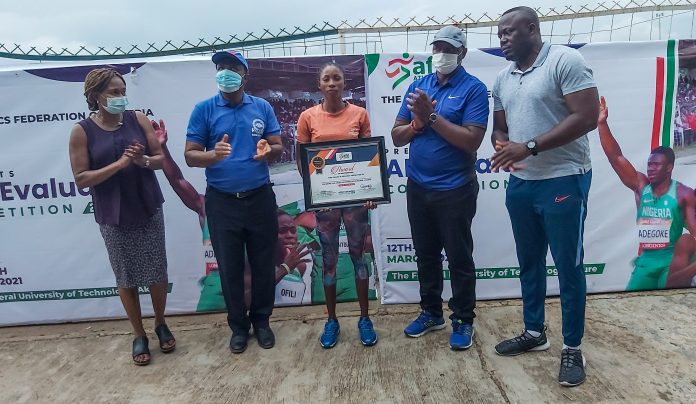 Honorable Minister of Youth and Sports Development, Chief Sunday Dare showered accolades on young Nigerian athletes that created new personal records at the track and field events that took place at the federal university of technology in Akure, the Ondo state capital.

He also used the opportunity to assure Nigerians that the National Sports Festival will hold in Edo state come April, 2021.

The Minister who revealed this at the Evaluation of athletes organised by the Athletics Federation Of Nigeria, AFN, also expressed satisfaction at the zeal put into preparation by the athletes and officials ahead of the games.

During an interview with press men, the honourable minister assured that discussions, negotiations and preparations are ongoing between government and the host state, to ensure that the sports festival takes place next month.

He then charged the young athletes to put in their very best inorder to surpass the feet set by their predecessors like Chioma Ajunwa, Falilat Ogunkoya, Mary Onyali among other greats of athletics, who have won medals for Nigeria at the games.

“It is my greatest desire that the sports festival holds this year in the interest of Nigeria sports development. It is going to be a great factor that will determine our performance at the Olympic games in July.
We seek the cooperation of the presidential task force on Covid-19, the Edo state government, the Health Ministry and the NCDC in making this dream a reality”

The minister also used the ocassion to further express his commitment to grassroots sports development in Nigeria.