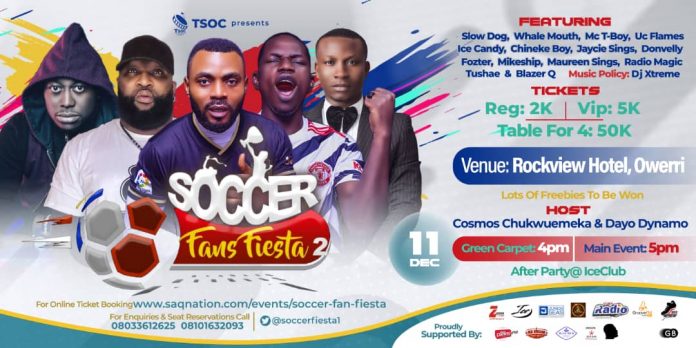 Owerri city will be lit again come Friday, December 11th, 2020 when Soccer Fans Fiesta 2 shake the fabric of the entire city at the Rockview Hotel in the heart of the capital of Imo State.

The chief anchor of the programme, Cosmos Chukwuemeka (Puyaka Master) who was recently named Heartland FC Media Officer told www.dasportstainment247.com that Soccer Fans Fiesta is aimed at educating fans of various clubs to eschew violence and not resort to it when results do not go their way, especially in their home games.

He explained the brain behind the Soccer Fans Fiesta 2 and what had been adopted as the theme of the 2020 edition.

“The theme for this year edition is tagged “win or lose no violence” which is aimed at educating club fanatics who allow their passion for their respective teams drive them into attacking an opposing fan or domestic violence.”

Chukwuemeka said that who-is-who in the entertainment industry in Owerri and beyond have identified themselves with the event and have confirmed their participation.

He gave the list of some of the celebrities in the entertainment industry in Imo and beyond that are billed to perform including Slow Dog, Whale Mouth comedian, and others while Dayo Arowolo (Dayo Dynamo) of Zanders FM is to serve as Co-host.

“The event will be graced by Slow Dog, Whale mouth comedian, and many more and will be hosted by Cosmos Chukwuemeka of Darling FM and Dayo Dynamo of Zanders FM,” he added.

Chukwuemeka said lots of exciting gifts are available to be won including bags of rice, Android phones, jerseys, football, and a lot more.